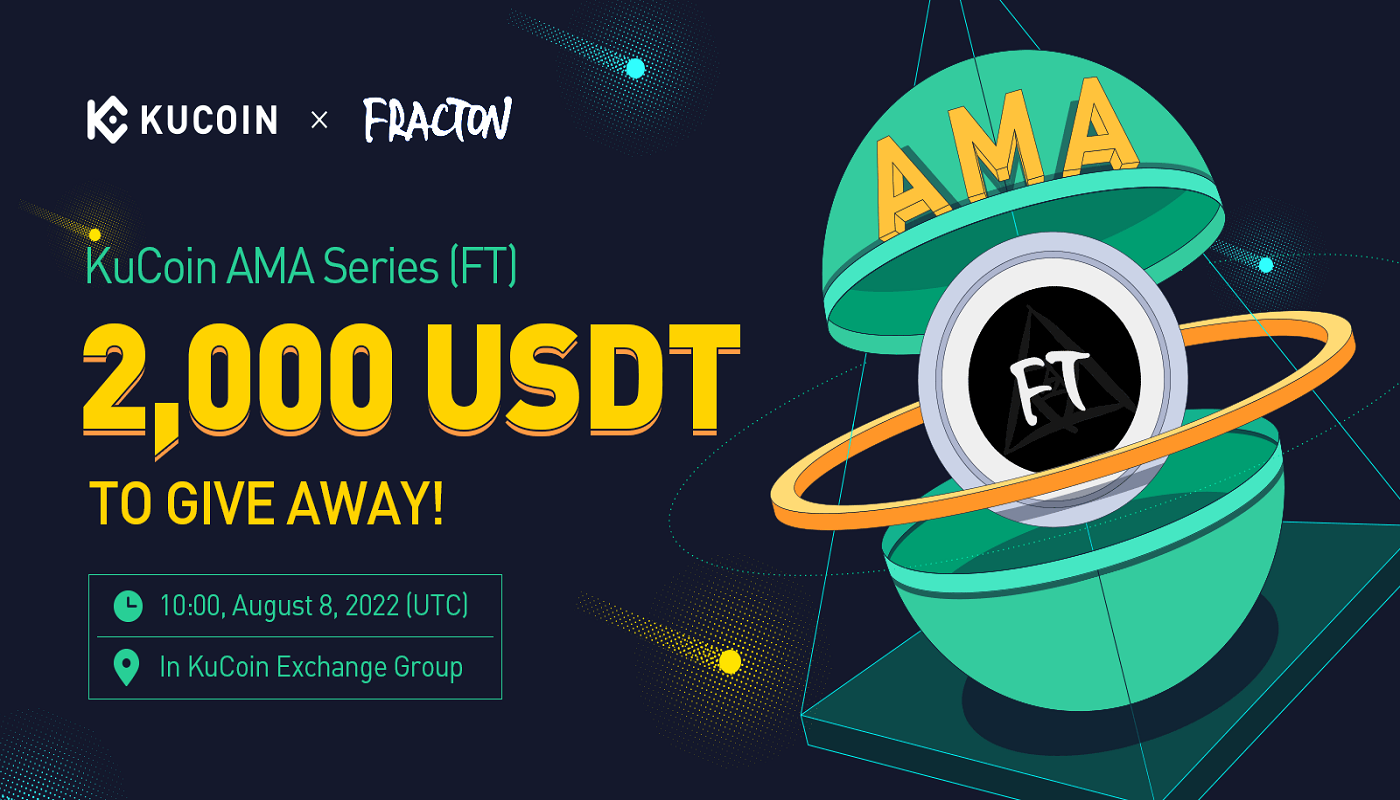 KuCoin hosted an AMA (Ask-Me-Anything) session with the Product Manager of Fracton Protocol, Bill, in the KuCoin Exchange Group.

Fracton Protocol is an NFT liquidity infrastructure with two steps of fractionalization (ERC721-ERC1155-ERC20), which provides permissionless liquidity and oracle for all kinds of NFTs. Based on a deeply reformed ERC1155 middle layer standard, Fracton is building a non-status smart contract system to increase the protocol’s efficiency, lower gas fees, and maximize asset security.

hiNFT is an ERC-20 token representing 1/1,000,000 ownership of one NFT in Fracton Protocol’s Meta-Swap pool, aiming to release NFT fractions’ liquidity further. So far hiBAYC and hiPUNKS trading pairs have been launched and there will be more fractionalized NFT trading pairs, based on other top NFT collections, being launched in the near future.

Q: Why did the team decide to create Fracton? What is the story behind it?

Bill: We believe that the liquidity and trading demand of the top NFT collections are not fully released. This is evident from the market statistics. Top NFT collections such as BAYC and CryptoPunks have a market value of over $1 billion, but their daily trading volume is around $2.5 million. The calculated turnover rate is less than 3%. If we look at the ERC-20 token market, the tokens with a $1 billion market cap generally have a turnover rate of 5% to 10%. Take ApeCoin, for example; its daily turnover is around $600 million, and the turnover rate is close to 20%.

The ERC-721 standard suppresses the NFT trading demand, and the other NFT financial products, such as NFT lending and fractionalized NFT, are not yet able to truly release their liquidity. This is why we want to build an infrastructure to break through the limitation of ERC-721 standards and provide the NFT market with better liquidity, whereby NFTs can be efficiently priced and traded as an important component of the financial system.

Q: Fractionalized NFT is not a new topic. Therefore, what does Fracton Protocol bring the renovations into this space?

Bill: The idea of NFT fractionalization has been around for some time. However, in my opinion, many fractionalized NFT products don't do a very good job maximizing the liquidity and optimizing usability for their users. For example, the project Fractional launched last year provided the users with the NFT fractionalization solution but the fractions created have a relatively weak financial attribute, which means these fractionalized assets cannot support a better trading environment for NFT asset owners.

Opensea, as the No.1 NFT exchange, charges its users 2.5% for every sale on the platform. It is reasonable to infer that such a high transaction cost, to some extent, hinders the circulation of NFTs and sets a misleading example to other liquidity protocols, such as NFTX, with a 5% fee rate. High transaction fees offset the liquidity those platforms bring; therefore, what they are doing is actually going against their purpose.

The fractionalized solution offered by Fracton Protocol differs from other solutions in the following aspects:

1. Fracton Protocol aims to provide an efficient and smooth fractionalized NFT trading experience for users through collaborating with KuCoin;

3. NFT ETF is priced against the whole NFT collection rather than individual NFT by building an NFT liquidity pool (Meta-Swap), thereby eliminating the differences between individual NFTs and providing a fair price for the whole collection.

Q: Why did Fracton choose KuCoin to issue NFT ETF?

Bill: As mentioned, Fracton provides a solution for NFT fractionalization so that a better circulation of NFT fragments is possible. However, NFT pricing is inefficient due to the lack of liquidity, so we hope to create more liquidity using ERC20 NFTs. Furthermore, while on-chain DEXs such as Uniswap provide a decentralized trading experience, they still have shortcomings such as high transaction slippage and instability.

The previous exchanges were all running NFT Index, the price index endorsed by no real assets. In contrast, the solution of providing NFT ETF by fractionalized NFT would be more convincing and could bring users reliable investment options.

KuCoin is a top exchange with an innovative spirit that continues to build for the Crypto industry. It is also effectively trying to bring users high-quality Crypto financial products. At the same time, KuCoin's processing technology for token transactions is mature and satisfies the trading demands of NFT ETFs. Based on KuCoin's strong market position and technical level, KuCoin chose Fracton as the underlying protocol of NFT ETF. Through the cooperation, Fracton Protocol will bring more accurate market fair pricing to top NFTs and provide efficient oracle services based on liquidity for the NFT market.

Q: Can you tell us more about the governance token FT?

Bill: Fracton (FT) is the governance token of our protocol, with a total supply of 100 million FTs, which are used to incentivize the interactive activities on Fracton Protocol. The incentive proportions are determined by vote-escrow FT, similar to CRV in Curve Finance.

Q: Any interesting things happening in the NFT space that draws your attention?

Bill: StepN recently gave out APE Realm Shoebox to BAYC holders through airdrop events. This increased the potential value of BAYC. The highest price of an individual APE SHOEBOX in the market reaches 4 ETH, equivalent to 5% of the BAYC's value. At the same time, Tiffany also issued a pendant for CryptoPunks holders. To get the pendant, one must verify they have the actual CryptoPunks in the wallet. Likewise, this also increases the market demand for CryptoPunks. Events like these will bring more transactions to the NFT market. Increasing trading volumes imply price fluctuations and more potential opportunities for top NFTs.

Since NFT ETFs are 100% backed by real NFT assets, big events in the NFT market will also bring many trading opportunities in the future. At the same time, for those who want to participate in airdrops or other activities, the relatively deep liquidity of NFT ETF also provides a new option for NFT buyers. Buyers can directly redeem NFT in Fracton Protocol without paying a high fee such as Opensea's 2.5% transaction fee.

Q: Tell us about the ecosystem of Fracton and your focus on the next step.

Bill: The infrastructure we built can create multiple scenarios for the NFT industry, having the hiNFT as the anchor of floor NFT in the market. As a result, hiNFT can be used as collateral assets when we extend our ecosystem to NFT derivatives, oracle, collateral borrowing, P2P lending, and more.

Q: What is your view on the NFT market?

Bill: From 2017 to 2020, the NFT market was not as flourishing as it is now. Only Cryptokitties and CryptoPunks barely survived. On the other hand, 2021 could be considered the first year of the NFT outbreak. The success of BAYC has made many people see the great value of NFT. Also, the rise of GameFi has further opened up the infinite possibilities of NFTs. As a result, the market cap of the NFT market grew from $200 million to nearly 40 billion in 2021. In addition, the scale and capacity of the NFT market are also developing rapidly. Few new NFT collections are issued, and approximately 300,000-500,000 NFTs are minted daily.

More and more people are starting to recognize the NFT market, especially those crypto outsiders attracted by the scalability and culture of NFTs. We have reason to believe that when the next bull market comes, NFT will lead the entire Crypto ecosystem. In this process, Fracton Protocol will solve the issues of fair pricing and liquidity of top NTFs, allowing more users or protocols to use the oracle pricing service provided by Fracton.

Moreover, Fracton will open the permissionless NFT fractionalization function. Users can be the brokers of NFT ETFs such as BAYC and CryptoPunks by themselves.

Q: When will you open a new hiBAYC subscription?

Bill: We will consider the market liquidity situation and circulating hiBAYC volume to decide whether to increase the hiBAYC subscription.

Q: How can I stay updated on your project?

Bill: Be careful with fake accounts!

Q: Will we pay high fees to convert People's BAYC to hiBAYC?

Q: Did you have the agreement from the developers of Bored Ape and CryptoPunks NFTs?

Bill: Most NFT projects like BAYC and CryptoPunks are decentralized and permissionless. Not to mention, our protocol acquired and owned some of them. So if an NFT fractionalization protocol cannot launch products without the projects' authority, I suggest you never buy these NFTs since they are centralized.

Q: Does your project only cater elite investors?

Bill: Not really. We are open to everyone regardless of how big your investment is! As my colleague advocates, you can invest in BAYC with even $1 now!

More specifically, we are open to traders and NFT potential holders. However, some of them might not be able to afford top NFTs. Nonetheless, our NFT oracle products are designed for various NFT developers for different NFTFI protocols.

Q: Short-term investors in the community and market are ever prominent. So how can you assure us of holding your token in the long-term?

Bill: Let me share with you our ambition for the future of Fracton Protocol. The next milestone for us is to build a permissionless Meta-Swap pool, better liquidity, and oracle will give to FT. We focus more on the products themselves rather than trying to juice up the token price. So, we will continue incentivizing the users in Fracton Protocol and try to integrate with other protocols to build a bigger ecosystem. We believe that as long as we keep doing what we believe, the market will eventually realize the value added that our protocol brings to the NFT space.

KuCoin and Fracton Protocol have prepared a total of 2,000 USDT to give away to AMA participants.