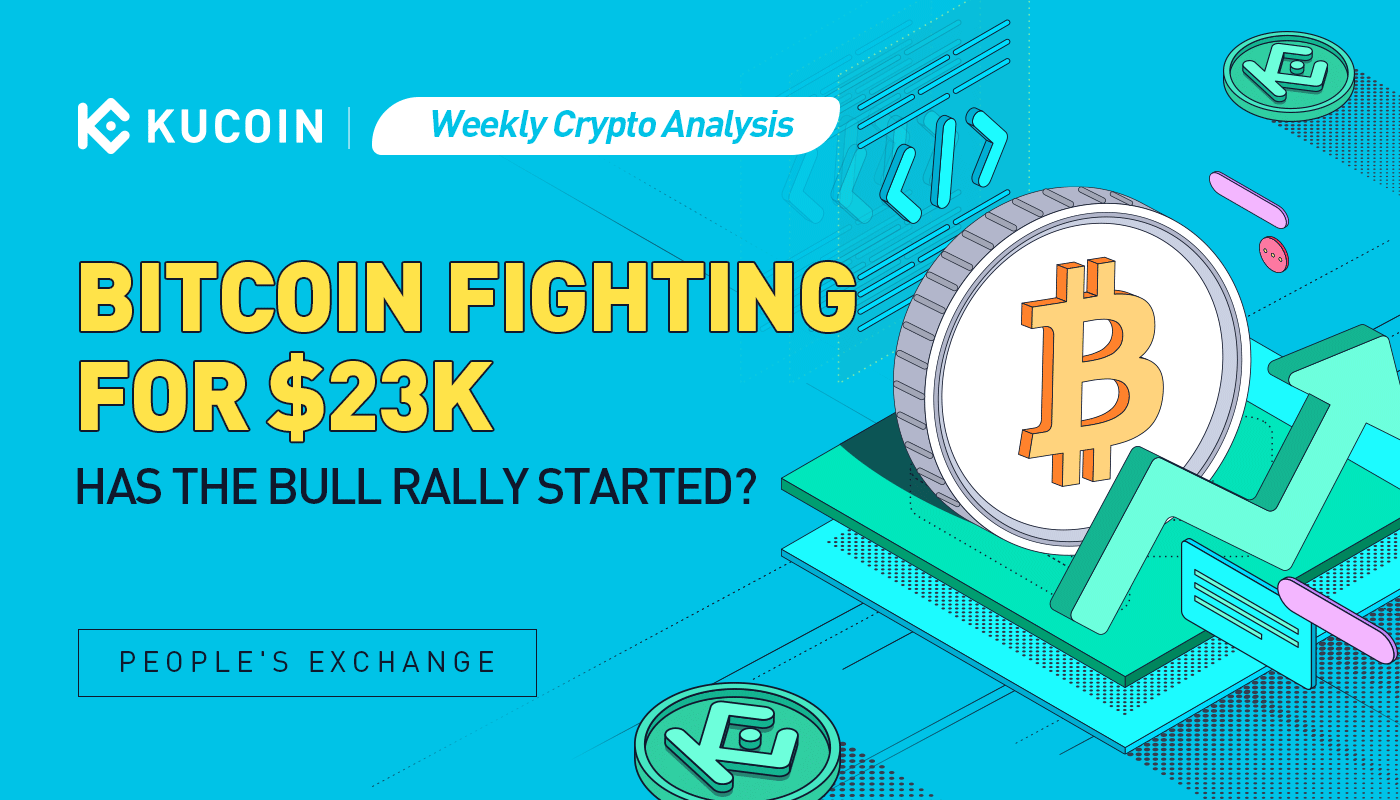 The Commodity Futures Trading Commission’s commissioner, Christy Goldsmith Romero, second-guessed VCs and institutional investments for lack of record keeping and believing an auditor no one had heard about in the FTX case.

The top cryptocurrencies in the crypto market continued their impressive start to 2023. Solana increased by 24% this past week, followed by PolkaDot, Bitcoin, and Ethereum, all hovering around the 10% mark. The market seemed unfazed by the announcement that crypto lender Genesis had filed for chapter 11, as seen in the unchanged trading volume across different assets. 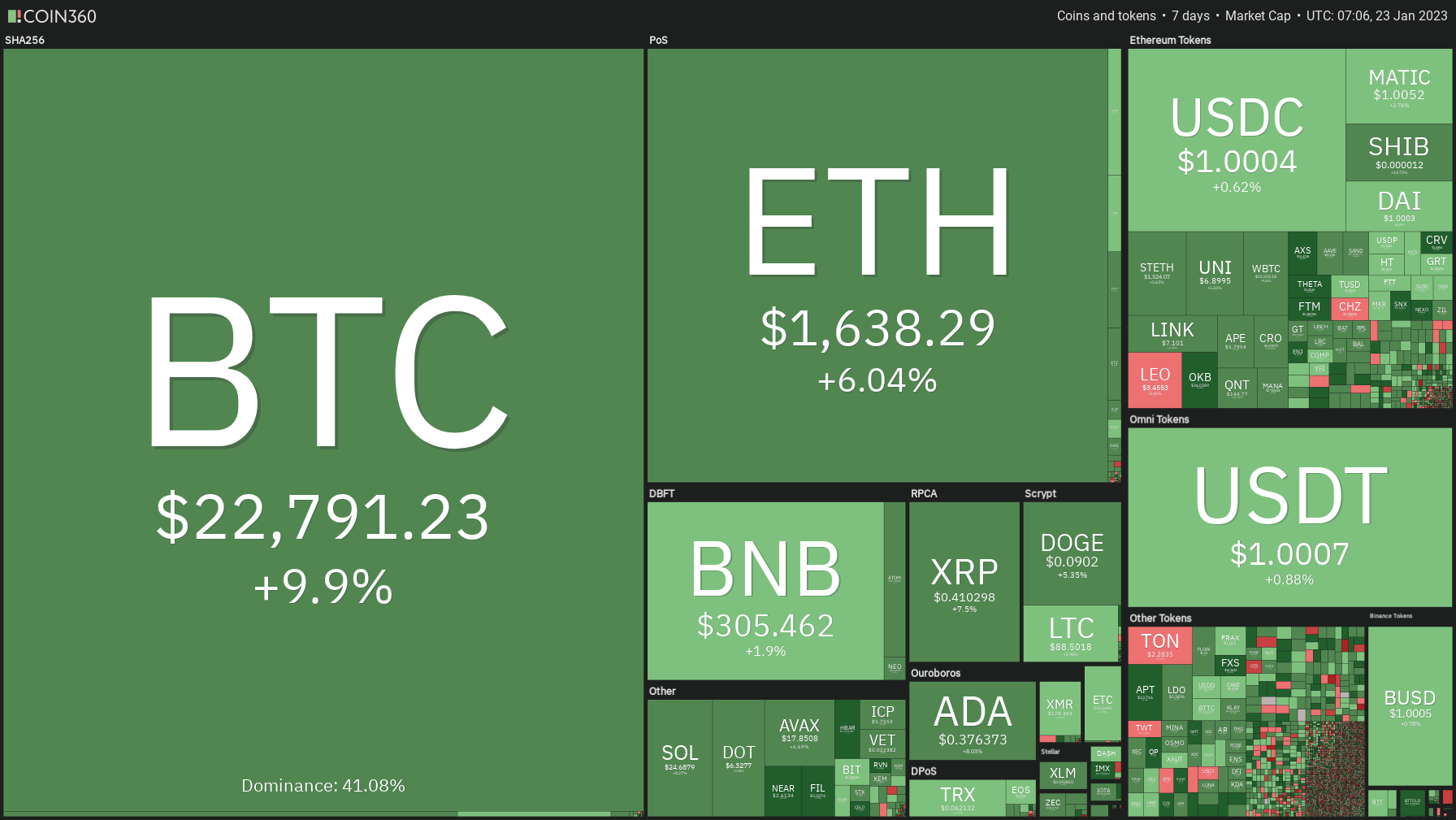 The fear and Greed Index stayed in the same range as last week’s figure of 52. Bitcoin raced to $23,000 this week before slightly retracing to $22,700, and the market is slightly optimistic about Bitcoin’s bull market. Despite this, some circles are still skeptical due to global macroeconomic issues. 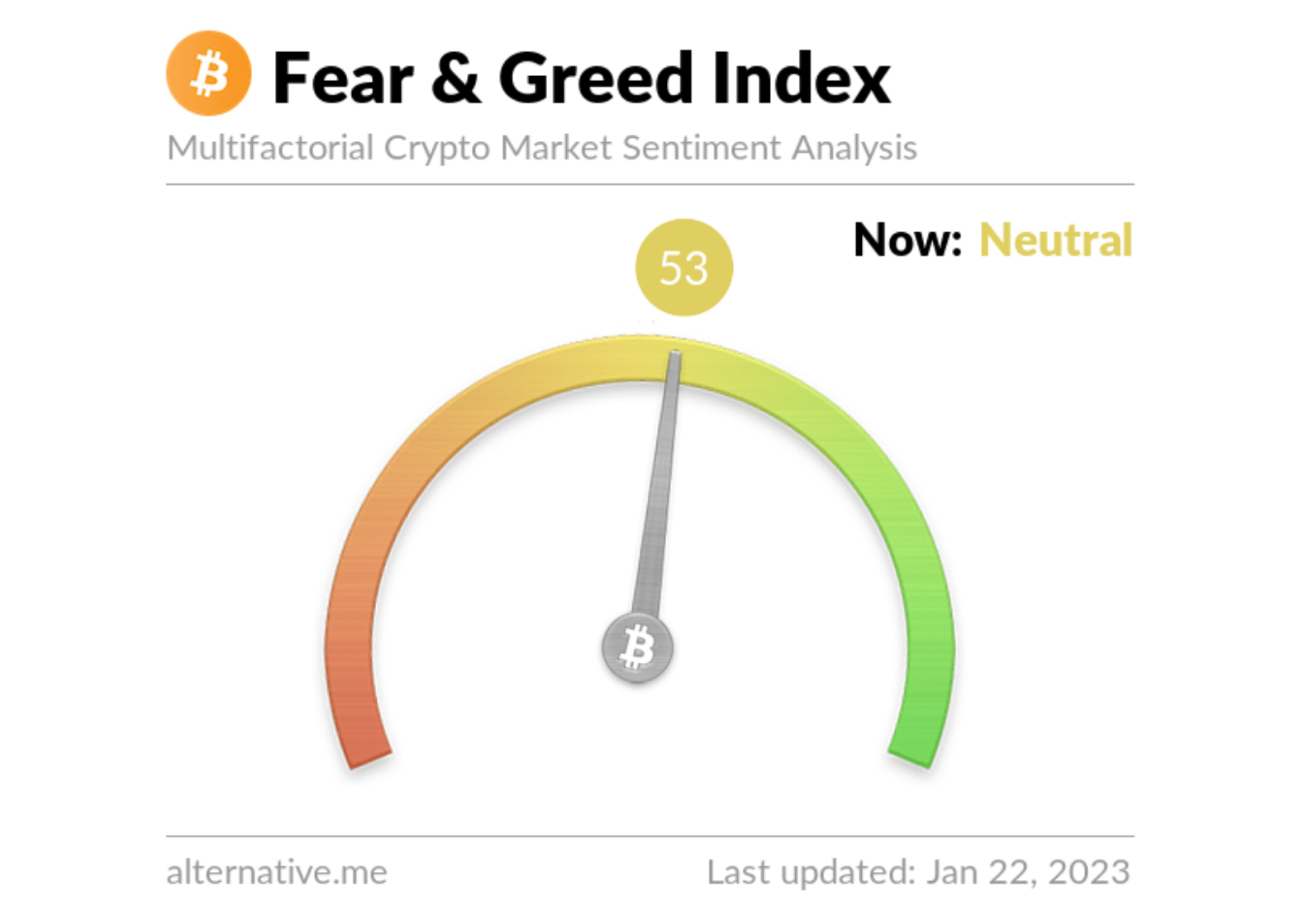 Though there is glaring evidence supporting the involvement of FTX’s founders in the collapse of the exchange, while investigations are still going, attention has been drawn to institutional investors and their position of due diligence before investing users’ funds.

The Commodity Futures Trading Commission’s commissioner, Christy Goldsmith Romero, second-guessed VCs and institutional investments for lack of record keeping and believing an auditor no one had heard about. Ignoring these red flags not only implicate these companies but further puts the limelight on how SBF exploited trust as a marketing technique.

According to DCG, Genesis’ Bankruptcy Filing Was Decided by an Independent Committee

Genesis Capital's parent organization, Digital Currency Group (DCG), denied any involvement in Genesis' bankruptcy filing in a statement on January 20. According to DCG, a special committee of independent directors suggested and chose to file for Chapter 11 bankruptcy protection.

.Grayscale Investments, Foundry Digital, Lino Group Holdings, CoinDesk, and TradeBlock Corporation are just a few of DCG's other subsidiaries that it claims to continue operating as usual.

On January 17, DCG informed its shareholders that it has "$526 million due in May 2023 and $1.1 billion under a promissory note due in June 2032." The business stated that it plans to settle its debts to Genesis Capital while reorganizing. Additionally, to maintain liquidity, the letter declared a halt to quarterly dividend payments.

ConsenSys, the organization that owns MetaMask, is laying off 11% of its staff. According to CEO Joseph Lubin, this is due to "uncertain market conditions" spurred on by previous failures of prominent crypto companies.

The CEO of blockchain company ConsenSys, Joseph Lubin, wrote in a blog post on January 18 that "poorly behaved" individuals in centralized finance had thrown a "wide pall on our ecosystem that we will all need to work through."

The move, according to Lubin, would affect 96 people and is a part of attempts to concentrate resources on the company's core industries.

Investors have paid higher prices over time to buy Bitcoin, and the currency is in a rising trend channel in the short term. This signals increasing optimism among investors and indicates a continued rise.

Looking from a technical perspective, Bitcoin has not touched the top of the Bollinger band for six consecutive candles, having previously touched the upper band (when seen on the 4 hr Timeframe). This might indicate that traders expect Bitcoin to lose some of its last week's gains or investors are a bit skeptical about Genesis’ bankruptcy. 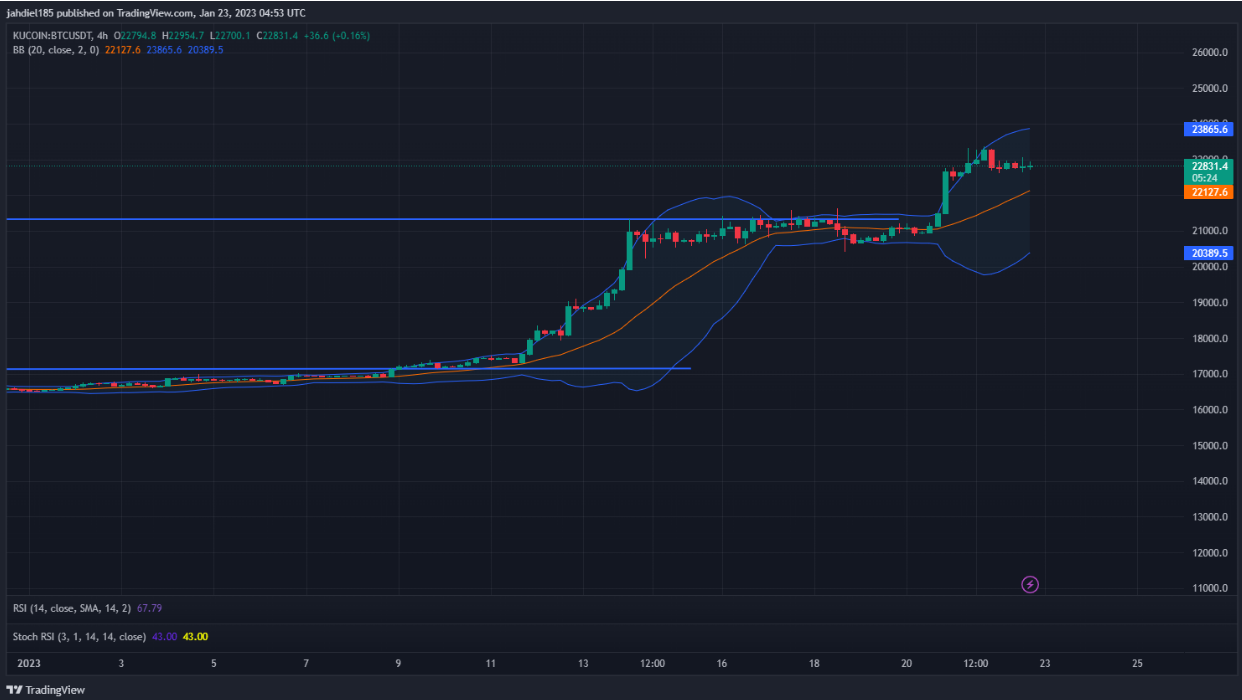 There is no resistance in the price chart, and further rise is indicated. In case of a negative reaction, the currency has support at approximately 21400 points. A positive volume balance indicates that volume is high on days with rising prices and low on days with falling prices, which strengthens the currency. 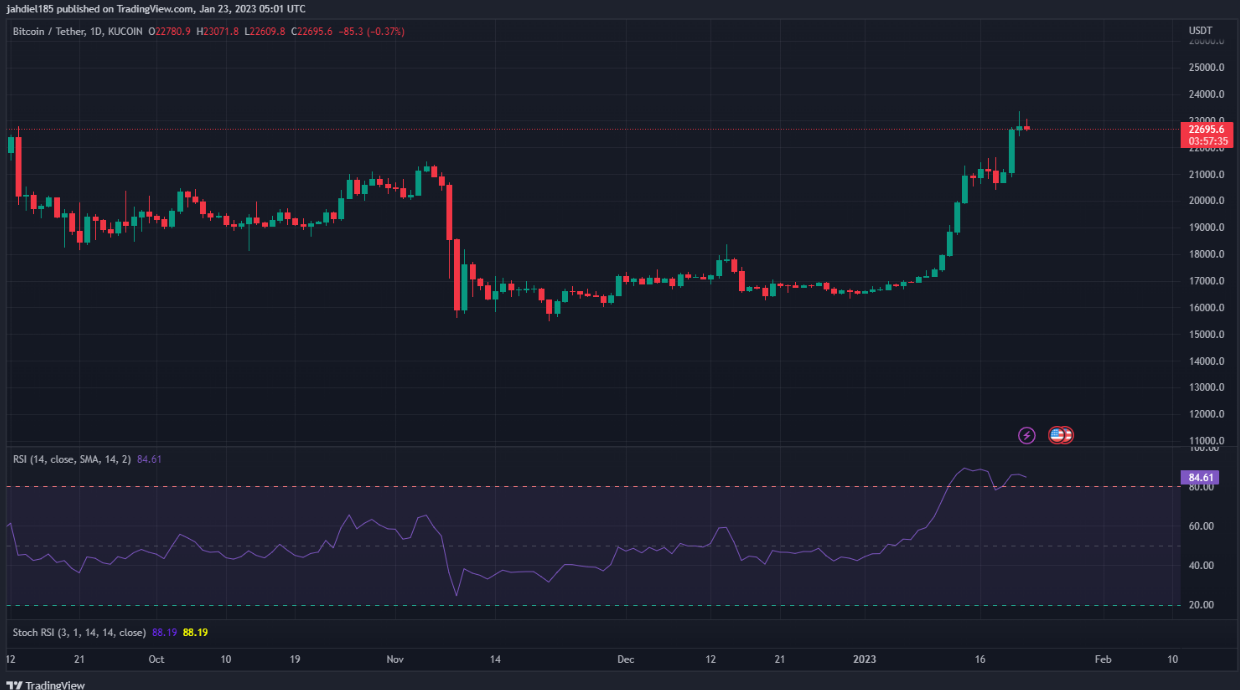 BTC/USDT Chart on the Daily Timeframe

RSI is above 70 after a good price increase in the past weeks. The currency has strong positive momentum, and a further increase is indicated. BTC is overall assessed as technically positive for the short term.

Did you know that KuCoin offers premium TradingView charts to all its clients? You can step up your Bitcoin technical analysis and easily identify various crypto chart patterns.