What Impact Coinbase IPO Brings to the Crypto Market?

The cryptocurrency space is experiencing another incredible week in an already remarkable year. Over the past few days, Bitcoin's value has been hitting an all-time high. Coinbase, the most prominent American Cryptocurrency company, issued a statement declaring its intention to go public by April 14.

This decision will eschew the traditional IPO process of employing legacy investment banks to finance the deals or drum supports. Instead, Coinbase intends to list its shares on the NASDAQ stock exchange directly.

Historically the crypto market has experienced several fundraising events like the ICOs, IEOs, and similar. However, this notable innovation led by Coinbase will be a significant development in the industry.

Coinbase is arguably the most prominent digital asset exchange in the market. This article will highlight a few probable impacts of this decision generally on the cryptocurrency market. Before that, let's delve deep into what Coinbase actually does. 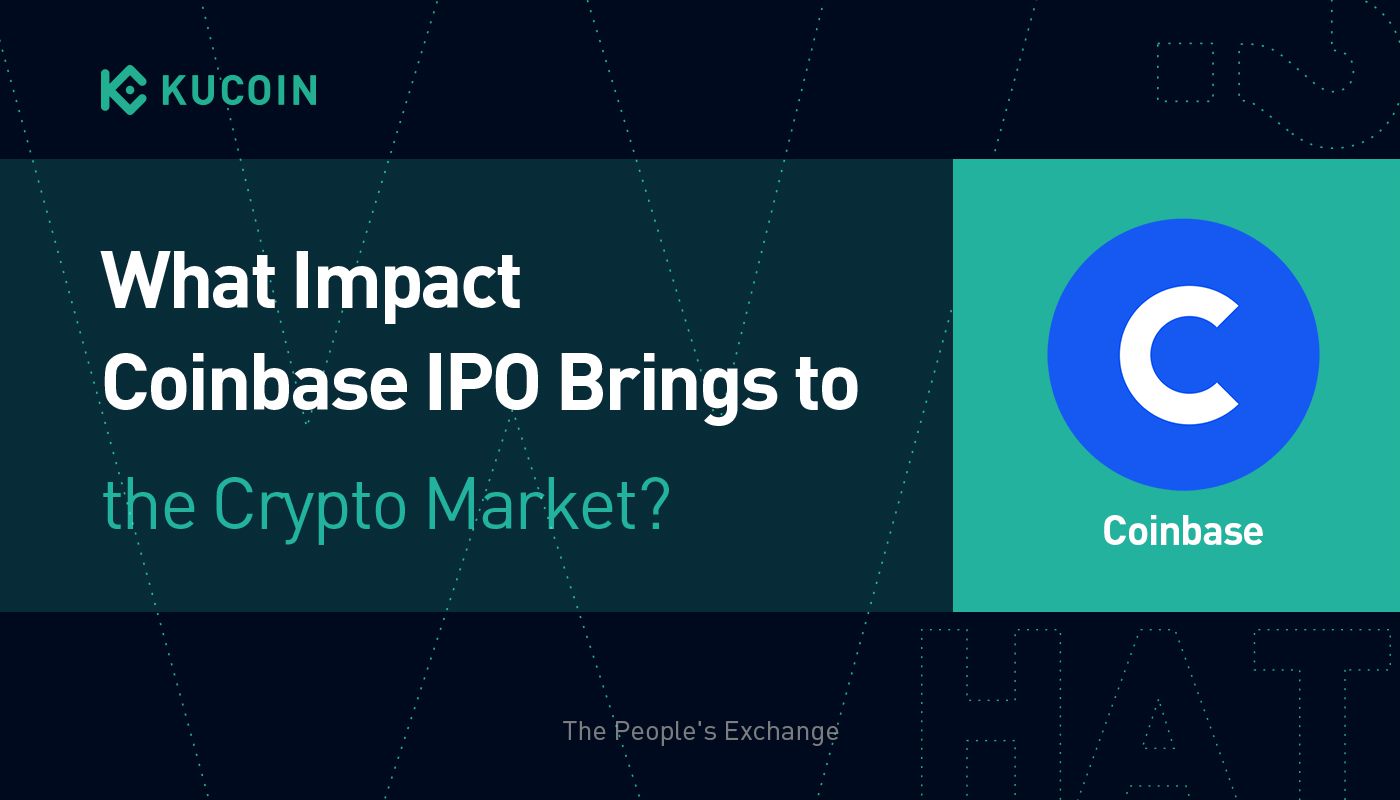 What Does Coinbase Actually Do?

Let's represent this with an analogy. Anytime you want to get some BTC, you have two options; purchase sophisticated computers using a series of complex algorithms to mine, or purchase it on an exchange. The former is very costly with insanely demanding techniques, while the latter only needs you to open an account with an exchange. Hence, most people prefer buying to mining cryptocurrencies, and this is where an exchange such as KuCoin and Coinbase sets in.

Coinbase acts as a very accessible exchange for several individuals in the crypto industry. It allows sellers and buyers to find common ground and safely carry out transactions. Coinbase also has features to accommodate more experienced stakeholders in the crypto space. It has a robust trading platform, Coinbase Pro, which offers several charts and features to assist you in plumbing the crypto market depths. Besides, it also has a free wallet for safe and easy storage of your assets.

Coinbase has established itself as a trustworthy platform in the market. Not only does it successfully carry out the task mentioned above effectively, but it also keeps its users' data safe and secure.

We have seen several crypto exchanges come and go, which makes you wonder why Coinbase is still standing the test of time. According to its report in July 2020, Coinbase announced that it had well over 35 million registered users, including international firms and retail clients.

The IPO-What Does This Signify?

Wall street describes an IPO, Initial Public Offering, as a process whereby a private company debuts the public stock exchange market. With an initial public offering, a company hires investment banks to aid the process of shares or stock sales to the general public. These bankers come at a cost – often unreasonably high. However, they surely help private companies sail through the unfamiliar seas and set a viable IPO PPS.

However, with a direct listing, i.e., by simply listing the stocks on an exchange, a company can bypass the costly investment bankers as well as their fees. The current company's owners convert their shares to stocks so investors can purchase these shares on an exchange.

Primarily, in an IPO, the companies intending to go public usually use new shares of stocks in a bid to source new capital. When listing directly, the company doesn't look forward to raising additional capital – the investors and the employees are making their existing shares of stock available for sale to the public.

The Decision to Go Public

Coinbase is a chief channel for a considerable percentage of every cryptocurrency-related operation in the market. And as such, we cannot downplay its legalization in the traditional market as a share-shared traded company.

Both in the traditional and crypto industry, stakeholders and investors are all salivating at the potential upsides of possessing a share of a significant exchange. Therefore, the question of price is up in the air. As per Bloomberg, in a recent Coinbase share's private NASDAQ auction, the shares were traded around 360 USD to about 375 USD. This denotes that the company's pre-IPO value might be in the 100 billion dollar region, qualifying to be the most capitalized legal entity present in the market today.

As mentioned earlier, Coinbase is opting in for the direct listing alternative. Using this can skip the need for investment bank underwriting. This is an explicit assurance of its adherence to the core principle of disruption, decentralization, and very virtues that the Blockchain industry represents as a whole.

Besides its adherence to DeFi principles, this approach is also an intelligent marketing plan. It is a clever way to reassure their clients that the exchange still aligns with the developmental paths indicated by its status as the "people's exchange". Furthermore, a direct listing could also serve as an opportunity to attract a more considerable sum for capital and liquidity while ensuring transparency. This decision is sure to please crypto and DeFi enthusiasts. However, the company decided against the issuance of new shares but allowed more investors to purchase them.

This perspective is also a practical approach to avoid costs related to IPOs, such as the expenses required to hire underwriters' services. Coinbase is in for an excellent start relative to pricing. However, its share price after the final listing depends considerably on BTC and other cryptocurrencies. This is because these currencies will ultimately function as the primary fund which investors will contribute to the IPO.

Is This the Right Time to Go Public?

There is no better moment than this to go public. Why? The last few quarters have influenced Coinbase management's decision to go public. Over the period, it witnessed the investment of well over 7 billion USD equivalent of BTC and the diversion of approximately 20 billion USD from the gold ETF (Exchange-traded funds). Therefore, the management thought about capitalizing on the situation and believed there would be no better time for action than this. We all hope this decision brings forth favorable outcomes.

There is a valid justification for this approach. Taking into account that notable individuals such as Goldman Sachs, BlackRock, and several others are investing heavily in BTC as an approach to saving value. The action taken by Coinbase can be deemed the primary approach to developing a reliable and legally backed bridge between the traditional financial market and the decentralized finance space. This action will attract many investors who have been waiting patiently for such an opportunity that assures viability in the cryptocurrency space.

The exponentially increasing BTC price has also played a significant role in Coinbase capital's inflation over seven times within the last few months. And the market landscape is portraying the possibilities ofconsistent and continued growth, as portrayed in the likes of Elon Musk's Tesla, featuring BTC in your balance sheet is a sure bet when it comes to attracting investors and ultimately increasing capital. And as a result, inflating the market value and the company's capitalization.

What Impact Will the Coinbase IPO Bring to the Crypto Industry?

Coinbase IPO can either positively influence or adversely affect the cryptocurrency space as a whole. This is because it is one of the mainstays present in the market today. Therefore, any alterations it undergoes will instantly affect the superstructure relying on it depending on the outcome of such actions.

We can project that one of the positive influences that may arise as a result of the successful launching of Coinbase IPO is the price of primary cryptocurrencies may skyrocket. This forecast is from a careful analysis of the market landscape. The launch will bolster investors' confidence and ultimately result in the influx of new stakeholders willing to take part in the cryptocurrency market.

Of course, the DeFi market will also follow suit. The demand for the services rendered by this market will considerably heighten among users who intend to purchase digital assets in a rush. Indeed, a trading frenzy will follow the initial sale of Coinbase shares, and thus, the number of individuals pushing to purchase it will follow in tow.

However, although this action will lead us into a whole new world of possibilities, multiple adverse scenarios could also play out. It may eventually serve as a barrier-creating event in contrast to the barrier-breaking one we expect. This speculation emanates from the fact that the Coinbase doesn't permit trading of fiat currencies; it is a crypto-centric platform. This fact would only breed some form of restraints may induce skepticism and caution among casual investors.

Another adverse possibility emanates from the uncertainty of participation levels relative to IPO and the degree of fallouts that may follow. As we can see in the trend of Facebook's IPO, turnout was quite reasonable. However, the share prices plummeted the following day, and of course, the joy of relevant stakeholders subsided.

We may witness a similar scenario to Coinbase, provided that this exchange's arrival on the traditional financial industry proves not to live up to its hype among average investors. The results could greatly disappoint individuals in the crypto space as a whole. They may subsequently result in a significant drop in the prices of specific cryptocurrencies that traders have bought in anticipation of a substantial price rise.

Without a doubt, Coinbase IPO is a significant milestone for the cryptocurrency and blockchain industry as a whole. However, there are still possibilities of risks that the sales of its shares might either create a significant boost in prices or result in a substantial price drop which may undermine the average investor's confidence in digital assets. Irrespective of the scenario that comes to play, it's a win-win situation for the Coinbase. This is because it has extended its grip on the traditional financial market as well.

Now that we've seen the potential effects of this event on the crypto industry as a whole let's take a look at how it may affect the most prominent cryprocurrency, BTC.

What does IPO signify for the future of BTC?

We have several cryptocurrencies in the market today. However, Bitcoin is still the biggest and has grasped the most significant share of public attention. The reason is pretty straightforward; the dramatic rise in value.

As the value of bitcoin rises, so does the trading volume on Coinbase. Therefore, Coinbase IPO will undoubtedly serve as a significant BTC validator over time. The IPO will undoubtedly attract a lot of attention. Institutional investors will view Coinbase IPO as an alternative to extending their investments to BTC. For instance, multiple skepticisms exist about buying assets directly, and as such, Coinbase stock may strike investors as a safer approach to easily participate in the decentralized space.

Should You Cash in as an Investor?

It is vital to note that most IPPs and other new listings are relatively riskier than investing your cash in public companies. Owing to the range of uncertainties and volatility in the future and present state of the cryptocurrency market, respectively, the higher risk percentage is very evident.

That said, as an investor, if you are willing to take the risk and delve into this opportunity, purchase an appropriately sized investment; don't buy with eagerness; think and assess the risks before purchasing. After all, it could be a profitable approach to investing in the ever-booming cryptocurrency potential.

Coinbase direct listing is a significant market signal. However, no one is still sure of its long-term effects on the industry, whether adverse or favorable. Even with that, Coinbase listing is a huge step for the blockchain industry, signifying cryptocurrencies' reception in traditional finance. Coinbase's success and its direct listing will usher the next wave of users into the crypto space by its continuous effort to help people own, store, and trade digital assets.