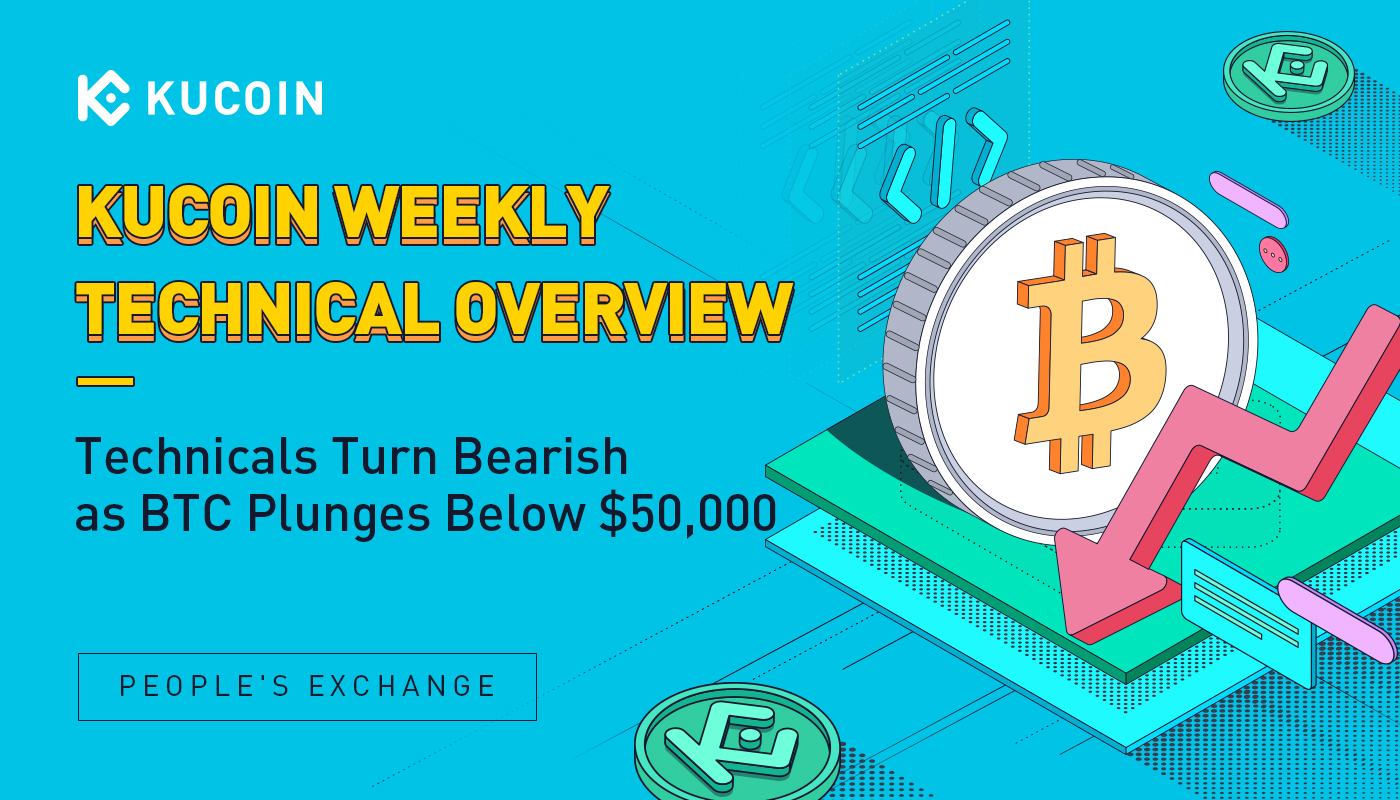 The entire cryptocurrency market has taken another plunge in prices, bringing the bearish momentum back to the market. Bitcoin, which had earlier given up the $60,000 level, was firmly holding around $52,000 to take support and make the next set of higher highs.

But with the recent plummet, it is now evident that the sellers are not done yet. Despite retracing from the highs of $68,000 all the way down to $52,000, the buyers failed to consume the discount, which eventually allowed the bears to take ground.

The world’s largest cryptocurrency, which is considered one of the stable crypto assets, dipped almost 20% in a single trading session – proving the highly volatile nature of cryptocurrencies.

Along with Bitcoin, the entire crypto industry observed a massive tumble. For instance, Ethereum was down by about 15%, while Solana and Cardano dipped by 15% and 22%, respectively.

All that being said, the recovery that came in instantly after the fall was rather interesting. During the recovery, it was for the market leaders to shine. But, of surprise, Bitcoin was not one among them. Assets such as Ethereum, Solana, Terra recovered completely from the drawdown on the same trading day, while Bitcoin saw buying a little more than 50% of the drawdown.

On-Chain Abnormalities Moments Before the Crash

One of the first factors was a dramatic increase in the number of Bitcoins held on exchanges, which occurred hours before the decline. This statistic has been steadily dropping for several months, reaching historic lows. Nevertheless, over 45,000 Bitcoins were deposited in a single day.

Also, the data from All Exchanges Estimated Leverage Ratio, which measures open interest on all trading platforms split by their BTC deposit, jumped substantially hours before the crisis, essentially reflecting the degree of margin (leverage) utilized by speculators.

As a result, excessively-leveraged traders were the ones who lost the most during the crash's worst hours, with daily liquidations exceeding $2.5 billion.

The Exchange Whale Ratio was another statistic, which compares the 10 largest biggest deposits to all other balances. In uptrends, the metric tends to stay below 85%, whereas it slips below 85% in downtrends. And surprisingly, it has maintained around 85% for the previous few weeks and has even risen to near 90% lately.

According to data from Glassnode, long bets worth $112.4 million were wiped out in 10 minutes. In the previous four hours, $221 million had been liquidated. Interestingly,  Bitcoin hasn't experienced such a massive liquidation since early September.

Market Manipulation a Possible Cause for Bitcoin’s Instant Fall

According to some experts, the decline in BTC price on Saturday, December 4, 2021, was partly influenced by stop-losses triggered by margin positions, resulting in huge liquidations. Liquidations might have been caused by whale market manipulation, such as stop hunting, which can be detected by looking at the order books of several exchanges for large sell barriers and using sources like CoinGecko and CoinMarketCap.

The price chart of Bitcoin is starting to look quite interesting with the entrance of sellers in a bullish market.

The BTC market, which has been in an uptrend since the beginning of August, has allowed the prices to reach their previous ATH and even breach above it. But the market never really got the momentum to continue higher from the ATH around $60,000.

As a consequence, the retracement began in the market. From the highs of $68,000, the market slowed, transited into a range, and then took a dip, bringing the prices back to $56,000. The market (buyers) did react at this price zone, which brought a few bullish candles on the Daily timeframe. But, leaving no luck for the buyers, all the bullish pushes were getting sold quite aggressively – indicating the presence of sellers (in a buyer’s zone). 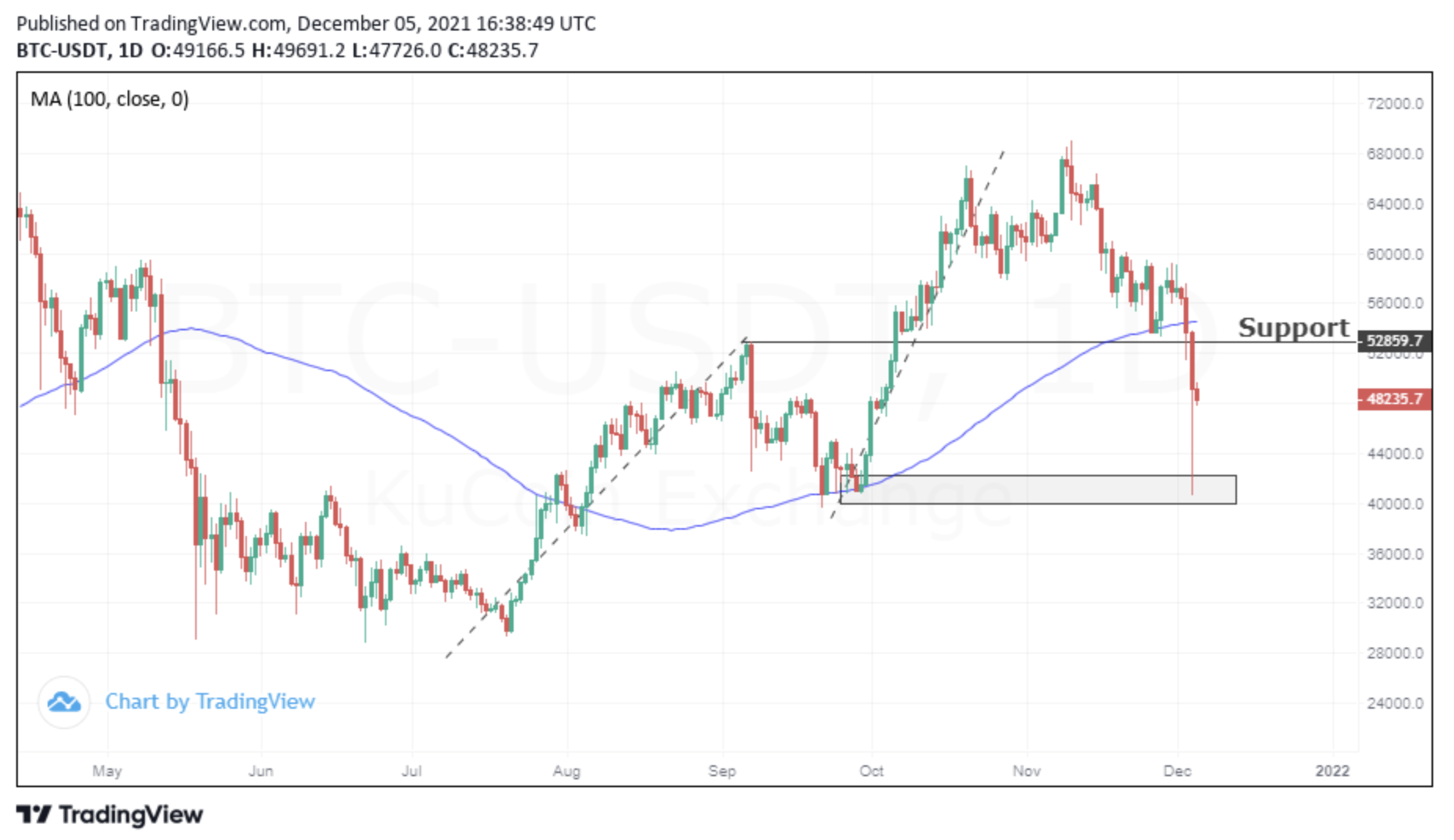 As most speculators anticipated the support level at $52,000 to hold in the form of a higher low and buyers took over the game for another impulsive move, reality turned to be different. In fact, the market did the right opposite of what was expected. With several long bids being gobbled up by the sellers, the market took a plunge, allowing it to free-fall from the support level.

With essentially no other support along the way down, the BTC market took a dip until $40,000. However, demand at this level did not cause the price to dip further and took the market back up to $48,000.

Although the market recovered by more than 50% percent from the lowest point of the fall, the fact that it breached below the support, as well as the 100-day moving average, is a cause of concern. You could wait for a while more to see how the markets react tomorrow and if you observe any hit of buying pressure, you can go ahead and buy the dip. But the market is expected to plummet a bit more according to technical analysis.

In conclusion, the type of recovery is the only technical factor that could guide one through the subsequent price action in the Bitcoin market.