Recent Partnerships Bring Demand Back in LUNA, XLM, and ENJ 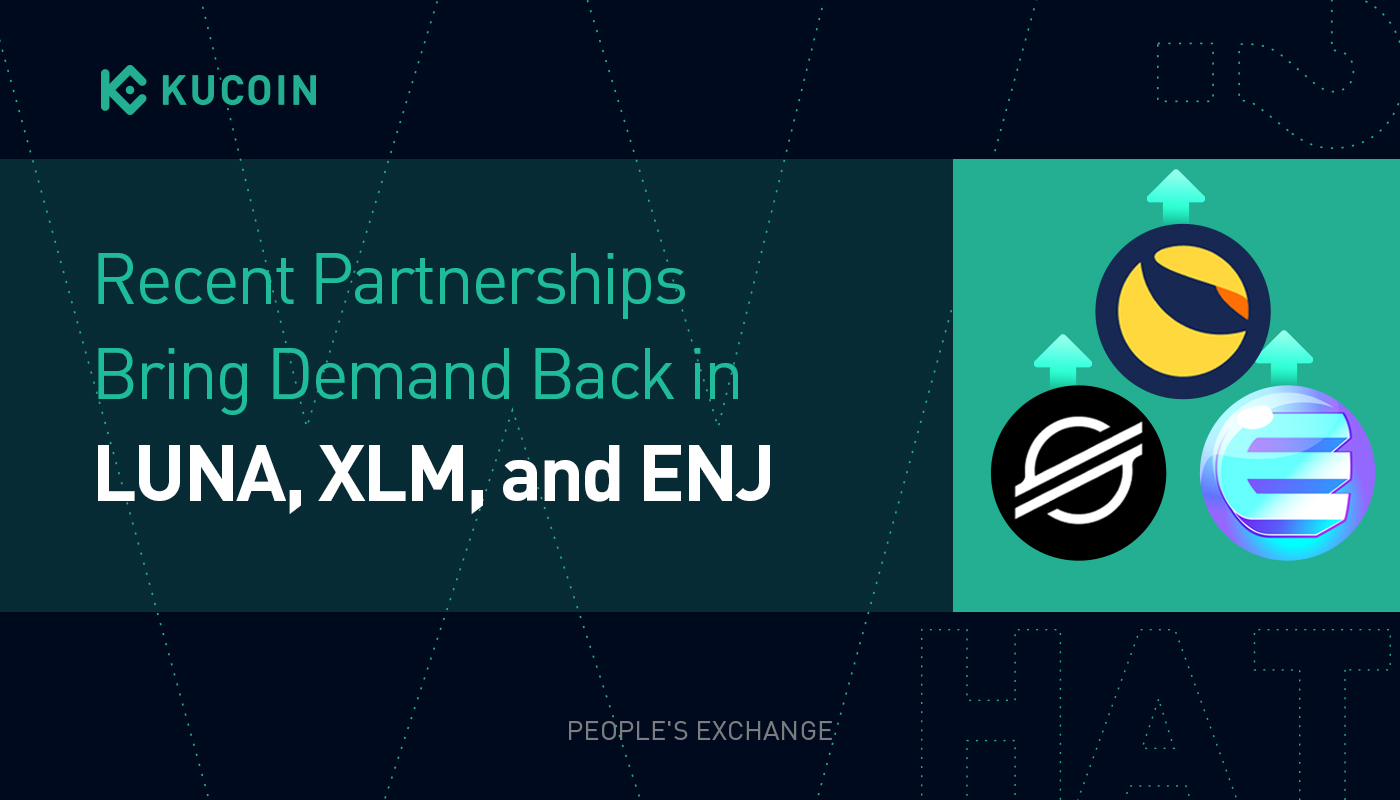 As the markets turned positive, the global crypto market capitalization has remained well above $2 trillion. Not to mention, the majority of the share comes from the trillion-dollar Bitcoin market. With the BTC market surging north since the beginning of October, the price has not only depicted a strong bullish move, but it has also been able to breach through a couple of strong resistance zones.

However, altcoins have been in a trajectory of their own, off-sync with BTC. After attempting to burst through their hurdles, most altcoins are holding at or below their supply levels. However, it does not cast them in a negative light because the long-term buyers have maintained strong throughout the short-term bear cycle. In addition,  the fundamentals and technical advancements keep the bulls breathing, which is reflected in the market price.

Anchor, Terra's unique savings system that delivers a higher yield on stablecoins, has reached a new milestone of $5B in total value locked (TVL). Mirror and Anchor are the protocols that generate the majority of Terra's on-chain demand. Mirror offers synthetic product trading, while Anchor allows for high-return deposits, offering a 20% annual percentage yield in TerraUSD (UST). With its demand growing, USDT has marched past the two billion dollars in market cap to become the fifth-largest stablecoin.

LUNA is highly comparable to UST. UST is a stablecoin that employs LUNA to maintain the same value as the US dollar. In terms of the relationship between the two assets, LUNA is mined when demand for UST declines and burned when demand for the TerraUSD increases.

Furthermore, Terra is anticipated to access a large set of dApps in the Cosmos ecosystem thanks to the Columbus-5 update. The update brings an Inter-Blockchain Communication protocol, through which  Data may now be transmitted between Terra and other Cosmos-integrated blockchains. Since Terra’s LUNA and UST will power the functioning, the demand for both cryptocurrencies is expected to rise. As a result, the market price will have a huge upside potential with this upgrade.

On the technical front, LUNA has breached its previous high of $44.22 to make another all-time high at $49.48. The price action of LUNA has been on an upward trajectory ever since the sellers threw in their towel at $7. In fact, LUNA was one of the first assets to make an ATH after the crypto crackdown in May.

Although Terra (LUNA) lost out of momentum lately, the buyers did not quit per se. Precisely speaking, the uptrend turned into a channeling market, with pullbacks getting deeper every step of the way. Currently, the altcoin has taken support around $40 and is heading back to the highs it set a few days ago. 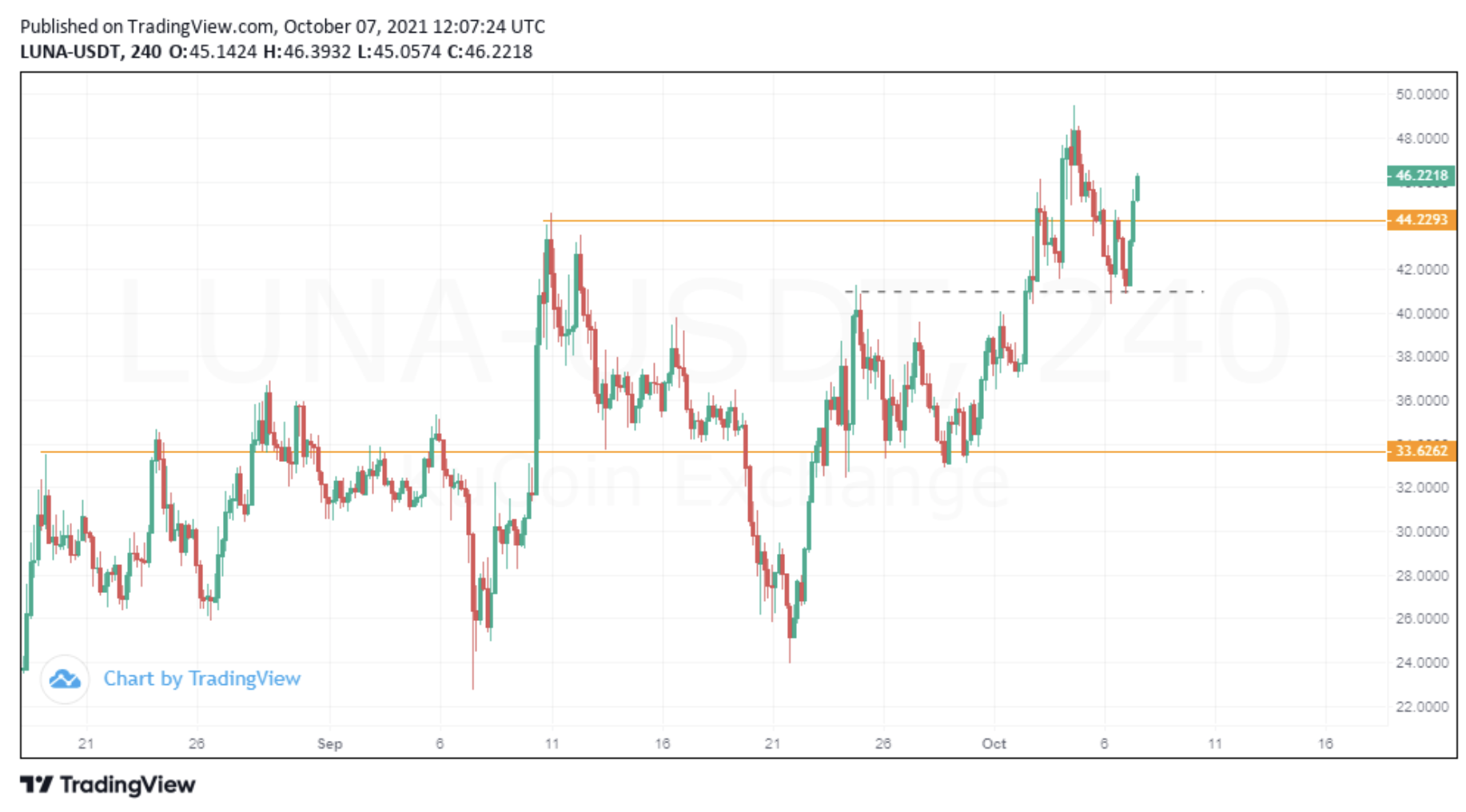 MoneyGram, an international remittance provider, recently announced a new cooperation with the Stellar Foundation to build a remittances bridge that simplifies funds transfer and allows faster settlement in USDC, Circle's stablecoin tied to the US dollar on a 1:1. This partnership clearly shows that the business is still trying its hand out in the blockchain despite an awful experience with Ripple earlier.

Moneygram would employ a version of USD Coin (USDC) operating on the Stellar blockchain to make operations more efficient, a press release stated. It also added that Circle and MoneyGram would use United Texas Bank as a settlement bank.

The partnership is indeed a great catalyst for the Stellar (XLM) market to ride higher. As a matter of fact, XLM observed a massive push to the upside, making it 17% higher in a single trading session.

Technically speaking, the market has firmly broken through the $0.3 resistance level to form into support. Given the present momentum, it is highly likely for the price to inch up to its next level of supply at $0.4. 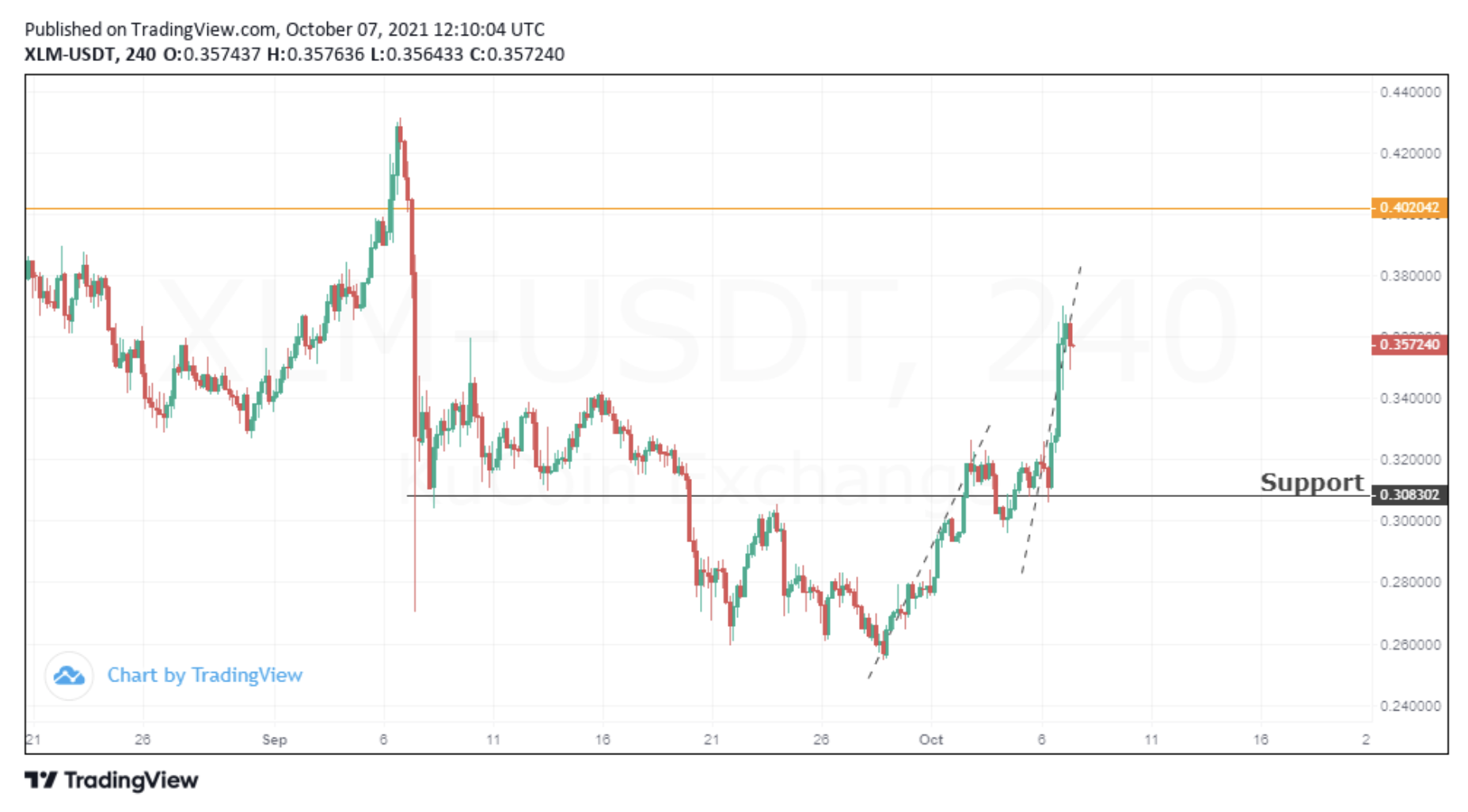 Stellar Lumens (XLM) is a fully decentralised consensus platform. It supports any type of currency and has a built-in decentralised exchange that can be used to trade any currency or asset.

Stellar is a technology that makes transferring money between people, companies and financial institutions as easy as sending an email.

Lumens is a native asset of the Stellar network that most crypto enthusiasts are somewhat familiar with. Interestingly, Stellar Lumens tokens have suddenly gained a lot of popularity as their value has suddenly started to rise recently. More specifically, Lumens are embedded in the Stellar network, where they act as a unit of digital currency. Similar to the way bitcoins and other cryptocurrencies work, Lumen cannot be physically stored, but users can use digital ownership of these assets via a private key. The Stellar network was launched in 2014 with a capitalisation of 100 billion, which was renamed Lumens in 2015 as part of a rebranding of the platform.

Stellar uses the Stellar Consensum Protocol (SCP) instead of Proof of Work (PoW) and, unlike most cryptocurrencies such as bitcoin , Stellar Lumens (XLM) cannot be mined.

In fact, 100% of XLM tokens were fully issued at the time of their creation.

The blockchain gaming and NFTs sectors have gotten a lot of interest in the crypto industry in recent months. Two significant companies in the NFT industry, EnjinStarter, and Enjin, have formed a strategic partnership to grow their marketplace.

The Enjin ecosystem's launchpad, EnjinStarter, is a recently built platform to support and help flourish the blockchain gaming sector. For Enjin,  the partnership is expected to help its ecosystem grow and evolve. Thus, with the collaboration, developers will be able to use Enjin's unique NFT technology more efficiently.

The expansion in the ecosystem would directly increase demand for the native asset of Enjin, Enjin Coin (ENJ). Despite the partnership, the ENJ coin has not made any significant push to the north yet. But, considering the fact of the market holding above the support level, a push to the north awaits. 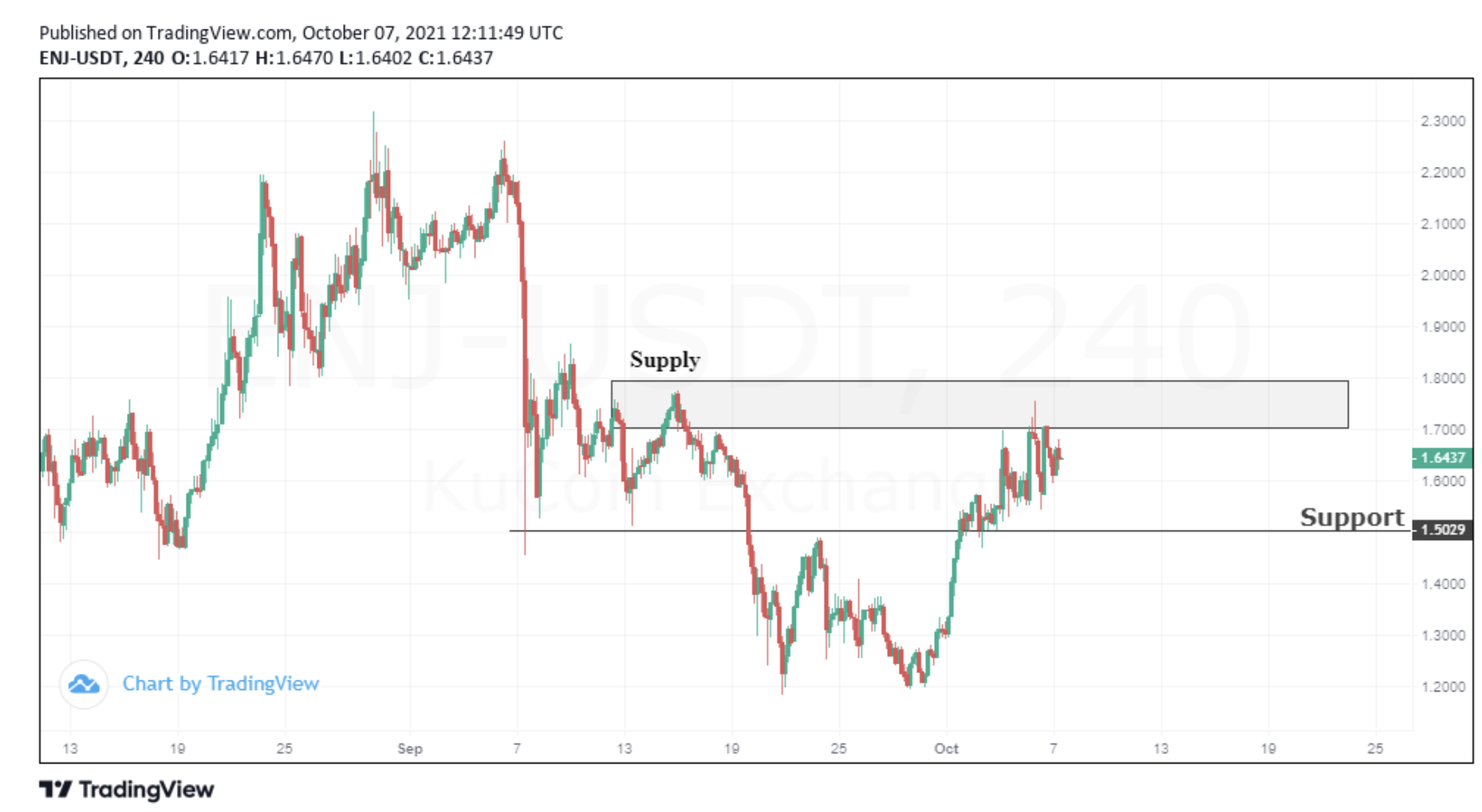 What do you think about the short-term price action of these altcoins? Would they continue their bull run? Let’s hope so!

Stay tuned and watch the KuCoin Blog for the follow-up articles related to this topic. All the best!

Did you know that KuCoin offers premium TradingView charts to all of its clients? With this, you can step up your crypto technical analysis and take your trading to the next level.