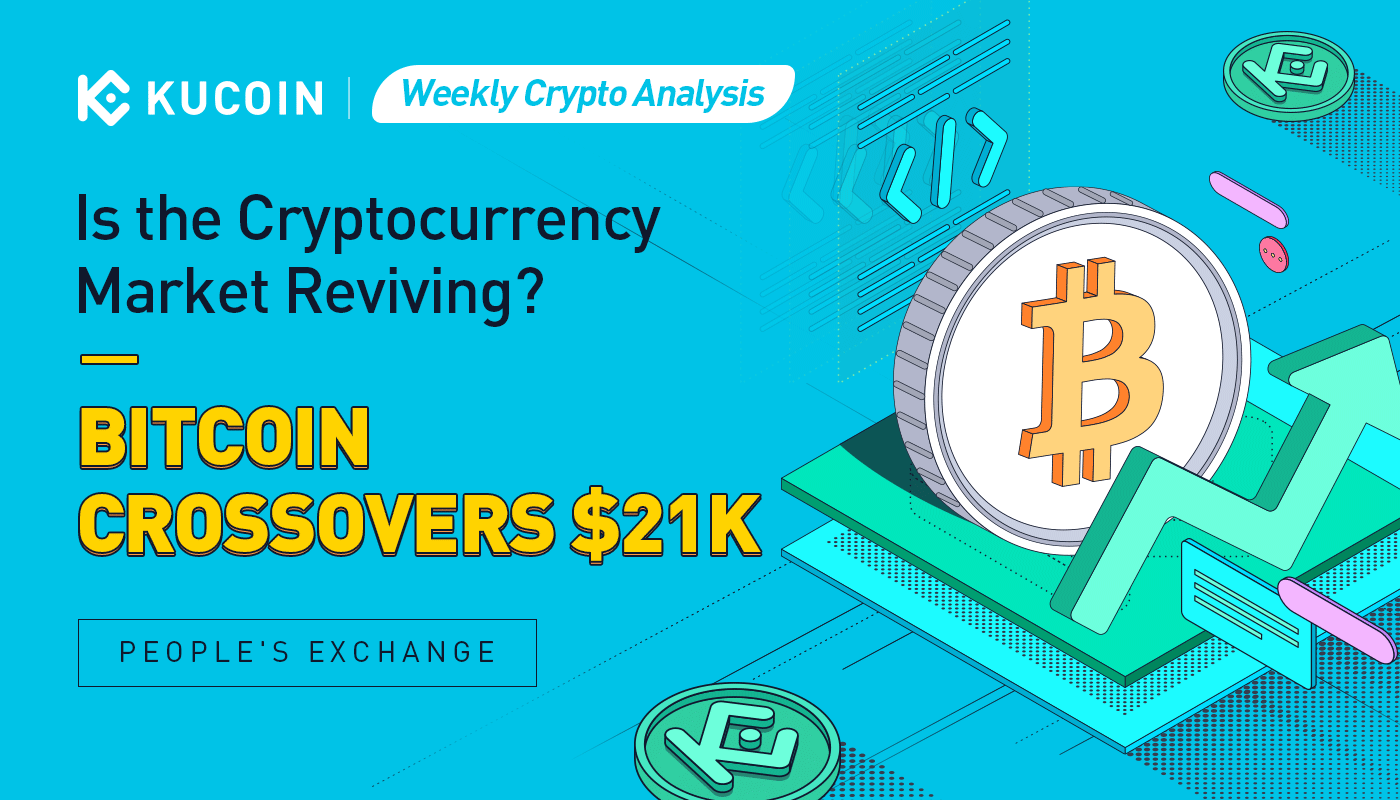 The cryptocurrency market finally showed signs of life, with most of the top cryptocurrencies closing their daily or weekly candlesticks in green. With the crypto buyers entering the market and Bitcoin price surging above $21K, the global market capitalization crossed above $1 trillion. However, the market failed to maintain its bullish momentum on Monday, and with a slight correction in the cryptocurrencies, the market cap declined 1.19% to $947.66 billion over the last 24 hours.

On Sunday, investors took solace in faint signs that the United States' economy was trying to cool and that the Federal Reserve could eventually ease up on its monetary hawkishness in the year. As a result, Bitcoin has become increasingly correlated with macroeconomic factors, which have deteriorated significantly over the last nine months.

Despite Tether's dwindling circulating supply, two top stablecoins by market capitalization, USDT, and USDC, saw their dominance reach an all-time high (ATH). The announcement of flagship smartphones from Solana also remains under the spotlight. Solana is set to launch a flagship smartphone with a strong crypto focus designed to encourage Web3 usage, including the use of NFTs. As a result, the announcement boosted the entire crypto community.

Considering the bearish tone in the crypto market, checkout KuCoin’s guide on Top 5 Moves to Make in a Crypto Bear Market. Let's go deeper and take a look at the most recent crypto market news and Bitcoin's technical outlook.

Despite a surge in Bitcoin's price, its dominance continues to remain in check as it managed to slip from 43.2% last week to 42.47% this week. This is mostly due to the increased dominance of stablecoins - mainly USDT and USDC. On Monday, the leading cryptocurrency pair, BTC/USD, is trading at $21,383.53, while Ethereum, the second-largest cryptocurrency by market capitalization, has rocketed to $1,216.55, up 12.74% in the last seven days. 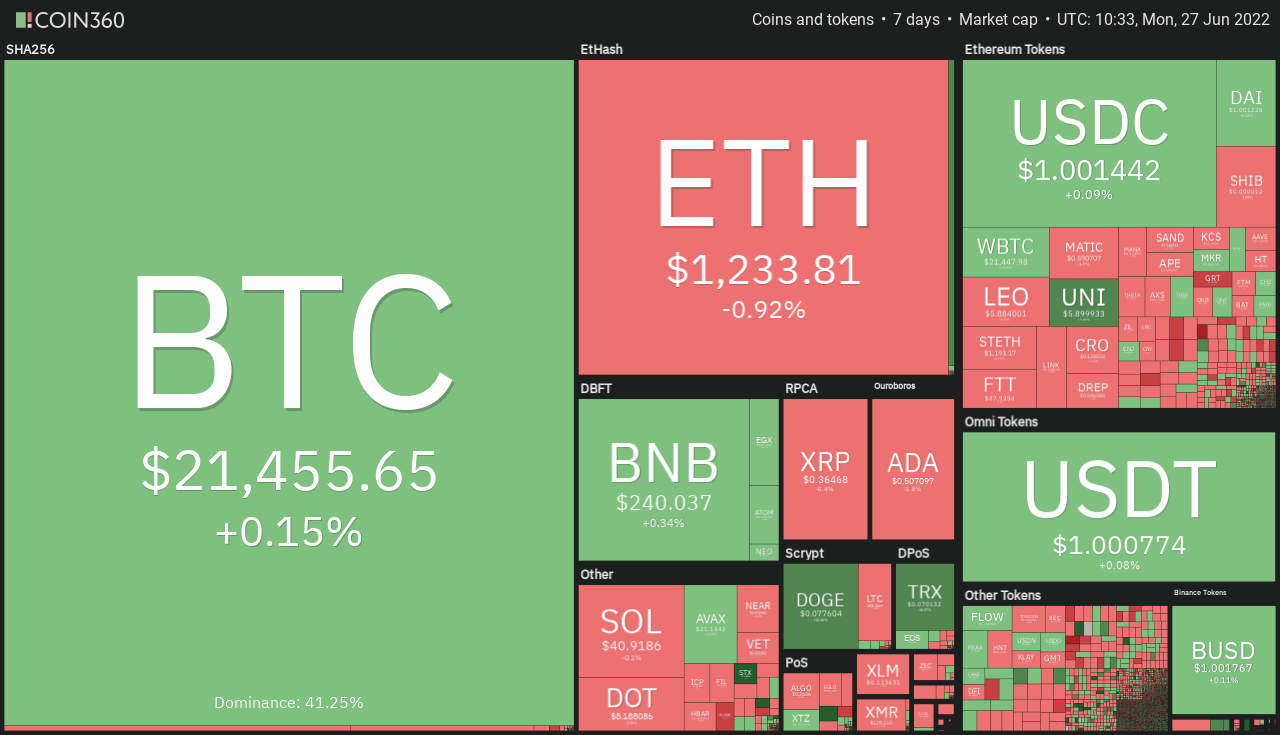 The cryptocurrency market remains risk-off due to a series of events we will explore below.

Bitcoin Crosses Overo $21K, Is the Crypto Market Coming Back to Life?

The Bitcoin price is consolidating near $21,000 as the tug of war between bulls and bears continues on Monday, while altcoins maintained multi-week record gains over the weekend.

The technical analysis for BTC/USDT is down the road, but the weekly Doji candle is acting as a sign of hope that the crypto market is still alive and well, and we may soon see some bullish price action in the market.

The Solana network's news release also fueled the bullish momentum in the cryptocurrency market. The big news was the release of Saga, a flagship smartphone with a strong crypto focus designed to encourage Web3 usage, including the use of NFTs. As a result, the announcement boosted the entire crypto community.

Solana co-founder and CEO Anatoly Yakovenko announced the release of Saga, an Android smartphone with a web3 focus. Yakovenko believes that the industry requires this action. Rather than using a laptop browser, Saga intends to add digital asset products and services that allow customers to transact with their cryptocurrencies via the device easily. Yakovenko also talked about SMS, which is a web3 layer for Solana phones and stands for Solana Mobile Stack.

However, the most recent Saga release may catapult Solana into the Big Tech ranks, moving him away from a cryptocurrency-centric environment and toward one that includes Apple, Microsoft, and Android. The ability of the Solana ecosystem to reach mainstream audiences can be increased, and other crypto blockchains may be persuaded to follow suit by the emphasis on providing additional web3 alternatives to mobile devices.

Morgan Creek Digital, a cryptocurrency investment firm, plans to raise $250 million from investors to purchase most of the shares of crypto lender BlockFi. Morgan Creek devised a strategy to quickly put together an equity offer in response to FTX's Tuesday morning announcement that it would provide BlockFi with a $250 million credit line. Meanwhile, three days after FTX granted the company a $250 million revolving line of credit, BlockFi is raising the yield on its lending products for Bitcoin, Ethereum, and stablecoins.

As a result, BlockFi's loan products will soon have higher interest rates. In addition, the cryptocurrency lending company will raise its rates for Bitcoin, Ethereum, and major stablecoins like USDC, USDT, GUSD, PAX, and BUSD, according to its official Twitter account.

It's also worth noting that the company's $250 million loans from cryptocurrency exchange FTX three days prior were not mentioned in the announcement. Instead, the loan extension was intended to "bolster" the company's platform and balance sheet strength. A loan granted to well-known cryptocurrency hedge fund Three Arrows Capital had already been liquidated, as had 20% of the company's workforce. Furthermore, a recently released financial statement states that BlockFi lost more than $285 million in the previous two years. Even though no one knows if it is true, the paper has confirmed rumors that the company is having money problems.

Weakening US Dollar to Drive Risk-On Sentiment for Cryptocurrencies

During the Asian session, the US dollar index (DXY) performed poorly. The US dollar immediately began to fall and fell below the day's ground-level support of 104.00. This slump could be attributed to lower expectations for US durable goods orders. A survey released on Friday revealed that consumer confidence is at an all-time low, providing yet another reason for investors to reduce their bets on interest rate hikes in the United States.

As a result, weaker US dollar prices were viewed as one of the key factors assisting crypto prices in limiting further losses. The Bitcoin price has risen by 20% since last week when it hit a low of under $18,000 per level. At the same time, Ethereum and the other ten most valuable cryptocurrencies saw minor gains.

Keep an Eye on US Durable Goods Orders

The increase in US durable goods orders is expected to be 0.1 percent, rather than the previously announced 0.5 percent. However, it is worth noting that the Manufacturing and Services PMI announcements last week were much lower than expected compared to previous readings.

Mary Daly, President of the Federal Reserve Bank of San Francisco, believes the Fed should raise interest rates by 75 basis points (bps) in July. In light of rising pricing pressures, the Fed must act quickly and follow up on a previous big rate hike announcement. The annual rate of inflation has reached a four-decade high of 8.6 percent.

Despite Tether's dwindling circulating supply, two top Stablecoins by market capitalization, USDT, and USDC, saw their dominance reach an all-time high (ATH). Lately, during the bearish crypto sessions, investors converted their Bitcoin and altcoin holdings to stablecoins to protect their funds from volatile market conditions. As a result, USDT and USDC dominance has never been stronger, reaching nearly 8% and more than 6%, respectively.

On the other hand, the USDT/USDC bridge has only recently been added to Bitgert's (BRISE) network. This is regarded as one of the most significant events of the month, and it has already piqued the interest of the cryptocurrency community. Adding stable currency to the Bitgert blockchain makes the project more competitive with projects such as Safemoon.

In addition, Bitgert has been completing projects faster than Safemoon in recent months. This can be explained by the fact that the blockchain is still awaiting a delivery from the Safemoon project. In addition, Bitgert's USDT/USDC bridge is operational, implying that Safemoon lags far behind.

The cryptocurrency market has finally risen despite the Fear and Greed Index's "extreme fear" signal. It appears that the bulls, lurking around the corner looking for good long positions amid positive fundamentals, have just entered the market.

The recent demand in the crypto world can also be associated with the fundamental and technical factors that are suggesting the market is oversold. If this is the case, the crypto market has the potential to show us more uptrends and green candles in the future.

The leading cryptocurrency consolidates in a narrow trading range of $20,000 to $21,500. On a daily timeframe, the BTC/USD pair has closed a series of Doji and Shooting star candles, showing investors are still unsure what to do.

The price of Bitcoin has started to come out of the oversold zone as the RSI (relative strength index) crosses 20 points from the lower side. Typically, it indicates that the oversold crypto asset is getting ready for a bullish retracement.

The leading cryptocurrency, Bitcoin, has completed a 23.6% Fibonacci retracement at the $21,500 level. A surge in Bitcoin demand could slice through the 23.6% Fib level and expose the BTC/USDT price towards the 38.2% Fib level at $23,180. The next resistance can be found at around the $26,850 level. 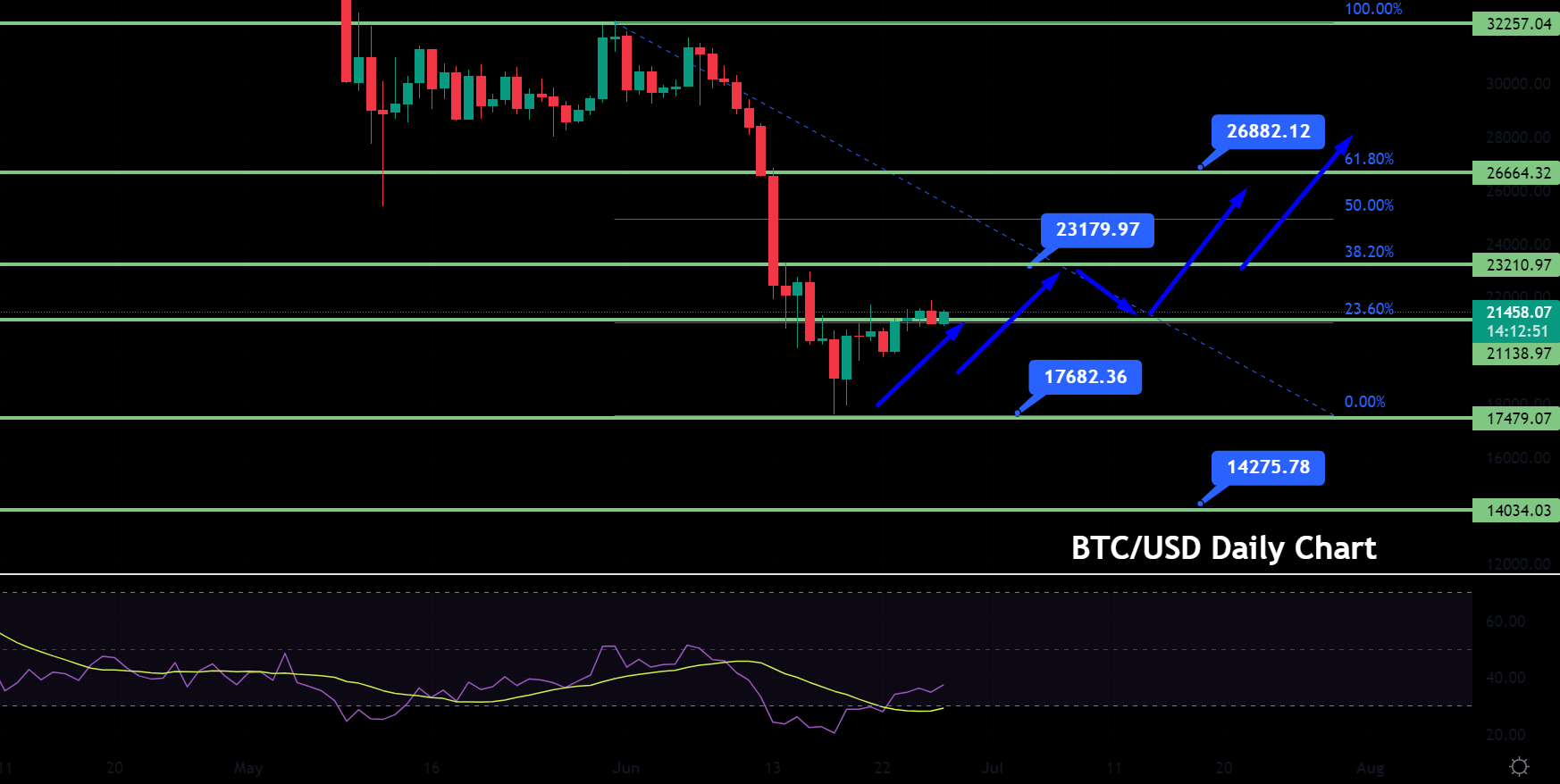