What Is Suez Token (SUEZ) And How Does It Work? | KuCoin Crypto Gem Observer

The recent issues in the Suez Canal have made headlines worldwide. The Suez Canal is one of the busiest routes in the world, so when it became blocked by a stranded cargo ship on March 23rd, the effects were immediately apparent. It is estimated that about $2.6 billion in losses were being incurred per hour due to its importance to the global supply chain. With the congestion lasting seven days, the numbers really started to add up.

Wanting to prevent similar issues from happening again and speed up the process of dredging the Suez Canal, an anonymous team has developed the Suez Token Protocol. The team’s state of the art PoD (Proof of Dredging) protocol will play a vital role in encouraging excavators to dredge. 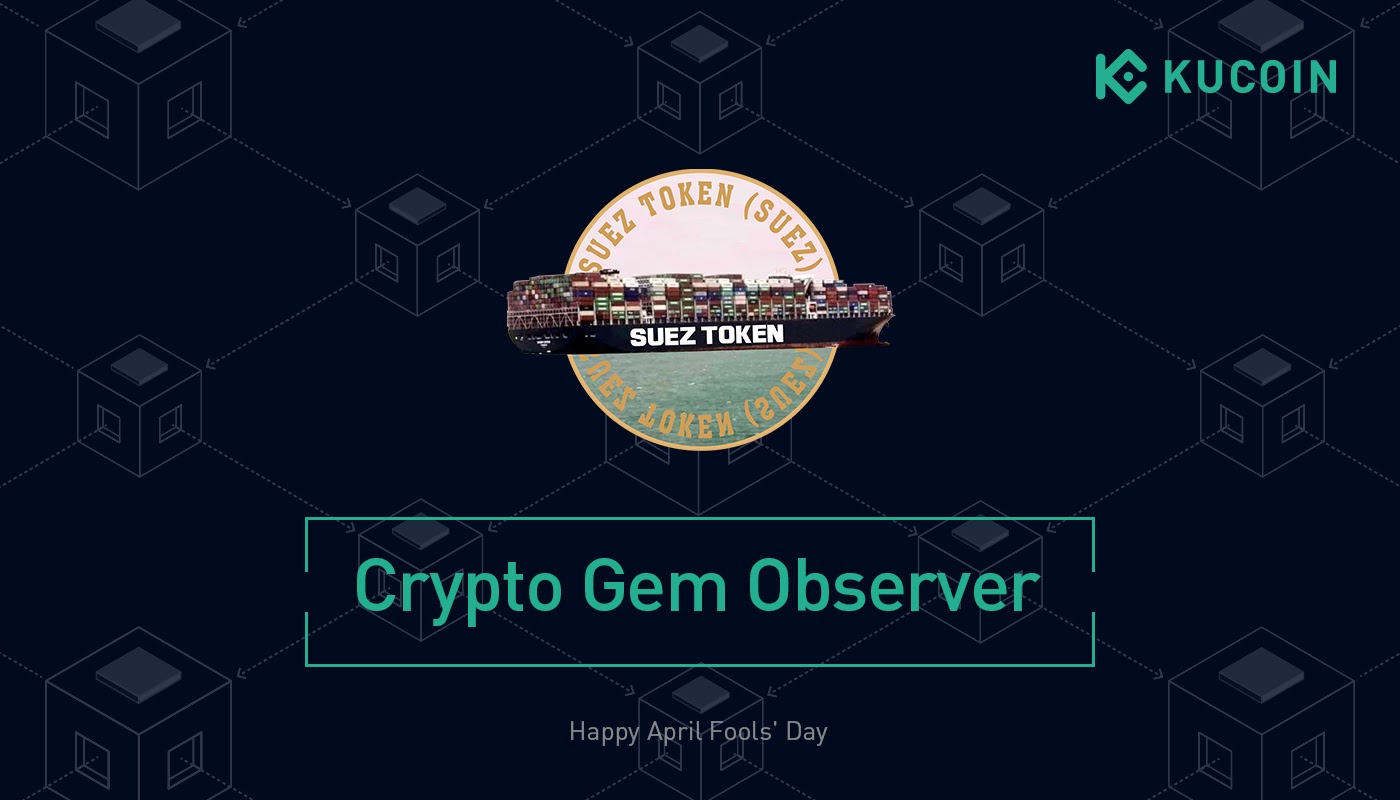 What Is Suez Token?

Suez Token was created as a way to avoid similar incidents such as what occurred in the Suez Canal from happening again. Seeing the global impact the incident caused, the team behind the project quickly set out to develop the Suez Token Protocol to incentivize the clearing and dredging of the canal.

When the Suez Chain launches, it will operate as an interoperability protocol based on the Substrate of Polkadot, with the ultimate goal being to become a parachain of the Polkadot ecosystem or even a second-layer relay chain.

At the same time, with the current boom in the NFT market, the Suez Token protocol will launch an NFT Minting Platform. Three NFTs have already been minted on the platform as below, and please stay tuned for the upcoming public auction.

The proceeds of the auction will be allocated to three different purposes:

20% will be distributed to all SUEZ Token holders

At present, the team behind the creation of Suez Token remain anonymous. However, some information shows that a few team members are from the depths of the ocean near Japan as well as the Skull Island.

What Is The SUEZ Token?

The Suez Token is an SRC-20 token. It is a utility token that will act as the universal currency of the Suez Chain ecosystem. SUEZ will eventually be migrated to the Suez Chain once it launches at a ratio of 1:1. At present, 50 Suez Tokens are distributed for every ton of silt cleared, and the reward is halved every 4 years. The total supply of SUEZ Token is 20,210,401, and the distribution is as follows: What Are SUEZ Tokens Used For?

The primary purpose of the SUEZ token is as the universal payment method that is used throughout the Suez Chain ecosystem. It is used for staking as a way to earn rewards and for paying gas fees for transactions, etc.

Other application scenarios of SUEZ Tokens are as follows:

1. If the Suez Canal is congested again, the Suez Token can be used to rent excavators to remove the blockage.

2. Users who hold more than 6 SUEZ tokens can get a daily bonus, which comes from 50% of the daily toll revenue from the Suez Canal.

3. Holders of the Suez Token can enjoy discounts. If you hold more than 10,000 SUEZ tokens, you can enjoy a 20% discount on the toll when crossing the Suez Canal.

How To Trade SUEZ Token

The SUEZ token will have a primary listing on the KuCoin Trading Bot , and will be available for trading only from April 1st, 2021 to April 3rd, 2021. 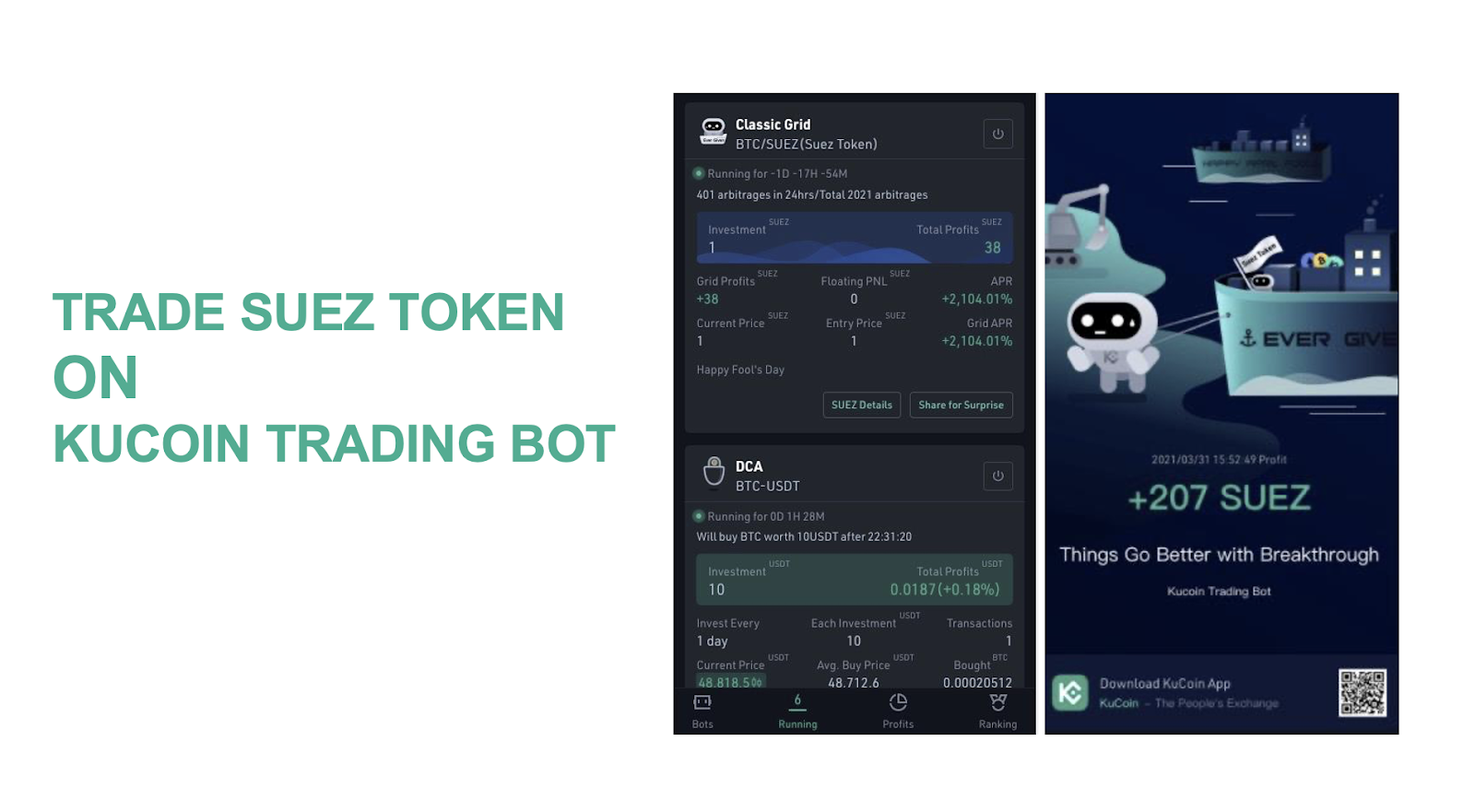 Log into the KuCoin App and tap on “Trading Bot'' in the menu of the homepage. From there, you can see that the trading bot for SUEZ token is running - click it to get more details and more interesting things will happen.

The purpose behind the Suez Token is clear. Not only is it environmentally conscious, it also has a far-reaching impact for the global supply chain and businesses worldwide. In addition, it helps to incentivize action, benefiting those who put in the effort to dredge the Suez Canal.

While little is known about the team at this point, the functionality of the token and the PoD protocol are well-explained and sound. The NFT application is also very forward thinking, entering into a fast-growing market. With the eventual move to the Polkadot-focused Suez Chain, we can all rest assured that congestion issues will no longer be a problem.