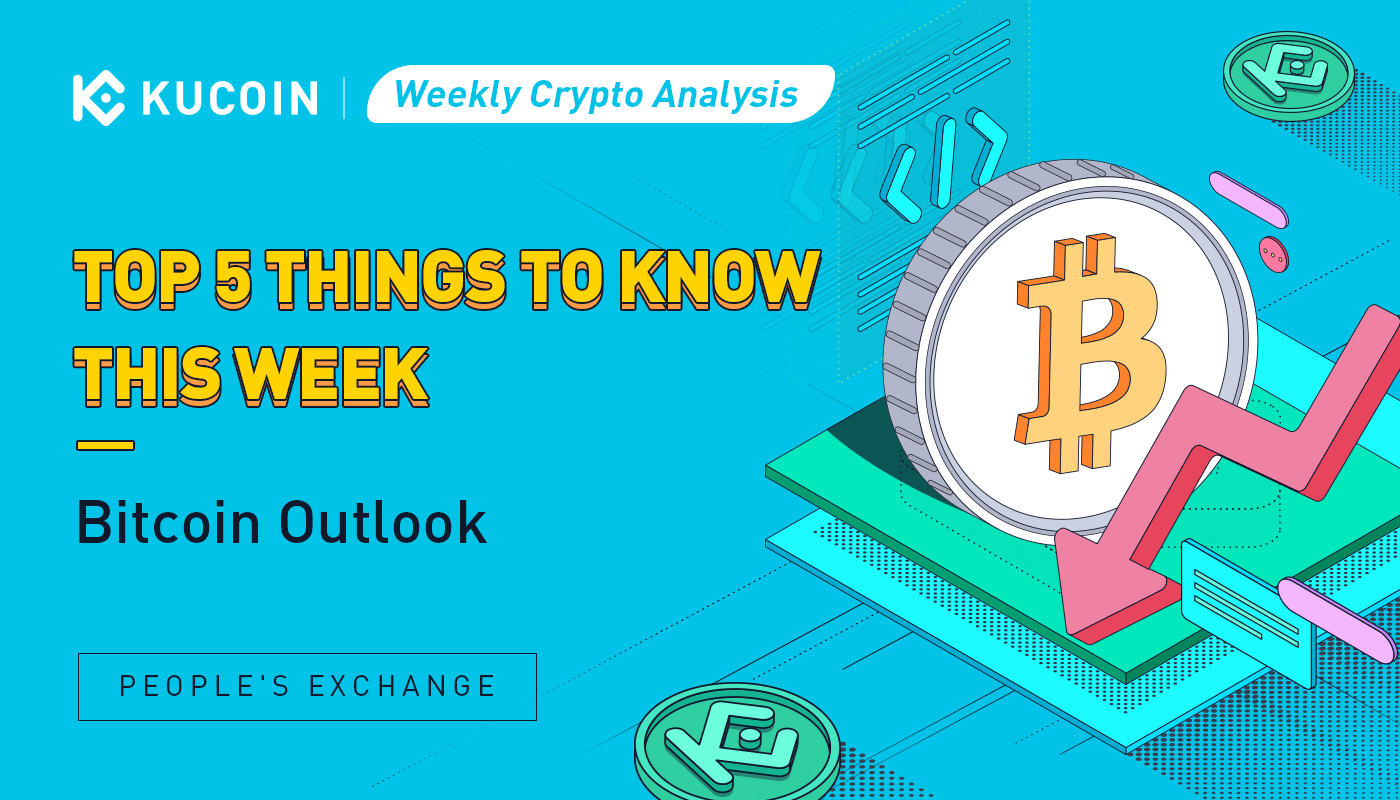 Tron (TRX) and XCD Network (XDC), which increased by more than 9%, were two major contributors to the gains. So let's take a quick look at the latest crypto market news and the technical outlook of Bitcoin. 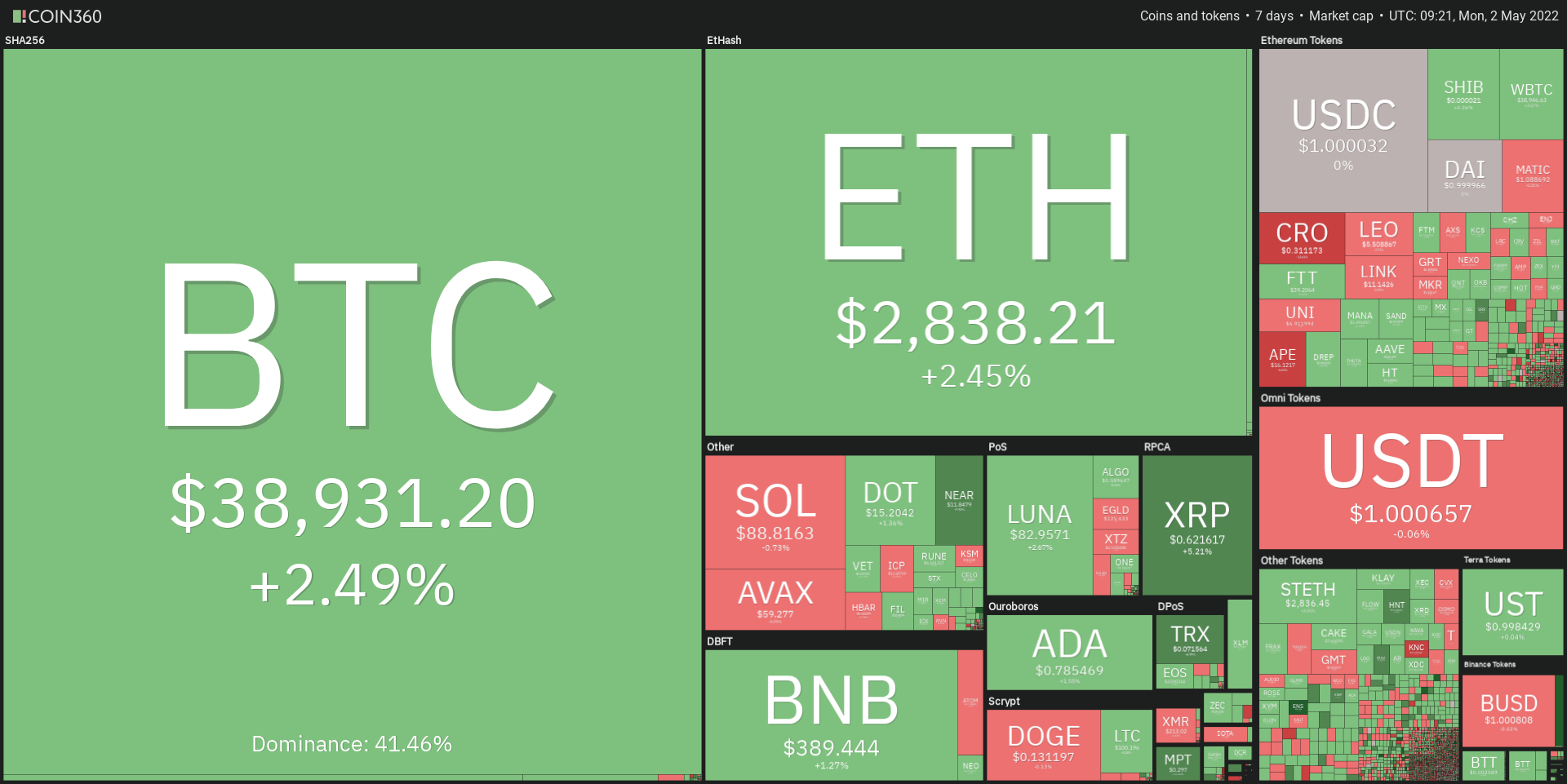 While Zilliqa (ZIL) maintained its bearish momentum, losing 28.19% to $0.0734 in the last seven days. The crypto market's trading sentiment is slightly negative, and digital assets are struggling to rise. As a result, we have a good chance to enter positions, especially since the markets are oversold.

Except for Anchor, all ten of the top DeFi protocols have seen significant 30-day TVL percentage declines. Curve Finance is down 11.74 percent since last month, Lido is down 13.73 percent, MakerDAO is down 16.81 percent, and Convex Finance is down 10.59 percent.

The Aave Protocol has lost the most in the last 30 days, falling 21.98 percent since last month. Curve Finance is the leading defi protocol, with a 9.56 percent market share and a TVL of around $18.8 billion today.

On Saturday, the Otherside metaverse virtual land sale took place, and many people purchased Ethereum-based NFTs dubbed "Otherdeeds." Demand for Otherside metaverse deeds drove up Ethereum (ETH) fees, causing the average ether gas fee to skyrocket. When the sale was completed, 55,000 Otherdeeds had been sold, and the project had raised nearly $320 million from the sale. Yuga Labs, the creators of the BAYC collection, wrote about the mint after it was finished and discussed some of the network issues.

The Ethereum fees used to mint the non-fungible tokens cost approximately $166.2 million, or 60,234 ETH. Furthermore, the mint experienced such high demand that crashed the blockchain explorer Etherscan. With such a buzz in the cryptocurrency market, it's likely to boost the overall cryptocurrency market sentiment and spark demand.

Fidelity Investments announced Tuesday that some 401(k) investors will soon be able to add Bitcoin investments to their accounts. However, financial advisors advise savers to exercise caution before taking advantage of the investment opportunity.

Investing in Bitcoin through a retirement account, such as a 401(k), is a potentially exciting proposition for those who want exposure to cryptocurrency but don't want to deal with the hassle of going it alone. However, it may expose them to greater risk, according to Catherine Valega, a certified financial planner in Boston.

A 401(k) is a popular workplace savings plan in the United States that offers tax breaks as an incentive to save for retirement. The United States Labor Department is highly concerned about Fidelity Investments' new offering, allowing investors to invest up to 20% of their 401(k) savings and contributions in bitcoin (BTC). According to a Labor Department official, it jeopardizes Americans' retirement security, emphasizing that "cryptocurrencies can present serious risks to retirement savings." Despite concerns from the US Labor Department, this news definitely supports bitcoin demand.

According to Bloomberg, global investment bank Goldman Sachs has made its first-ever cash loan backed by Bitcoin (BTC). A bank spokeswoman told the publication that the secured lending facility lent cash collateralized by Bitcoin owned by the borrower. She went on to say that Goldman Sachs was drawn to the deal because of its structure and 24-hour risk management.

Goldman Sachs has become more open to cryptocurrency. The investment bank's homepage featured cryptocurrencies, the metaverse, and digitalization in March. According to the firm, the metaverse represents an $8 trillion opportunity.

According to media reports, Degods DAO, a decentralized autonomous organization built on the Solana network, has purchased a Big3 professional basketball team, Killer 3s. Big3 is a basketball league created by hip-hop mogul and actor Ice Cube, with games based on a 3-on-3 basketball tournament format. The Big3 recently decided to use NFT technology to sell the rights to a team called the "Killer 3s."

The Big3 league essentially decided to sell 25 Fire-tier NFTs for $25K per unit. The NFTs grant the owners licensing, intellectual property (IP), and league-approved merchandise rights to the Killer 3s. Degods DAO paid approximately $625,000 for the Killer 3s team by purchasing all 25 NFTs associated with the team.

The Crypto fear and greed index analyzes emotions and sentiments from various sources and condenses them into a single number. The Fear & Greed Index for Bitcoin and other major cryptocurrencies is calculated daily. The crypto market sentiment shows a score of 24, indicating a bearish sentiment across the investors.

On Monday, the fear and greed index shifted from Extreme Fear to Fear, indicating a bearish bias among cryptocurrency traders is getting weaker. The shift from extreme fear to fear, according to the index, indicates that investors have begun to feel confident about the market. During such times, buyers typically begin to take positions. As a result, now could be an excellent time to buy.

Bitcoin is trading at $38,986, with a slightly bullish bias, and is mostly consolidated in a tight trading range of $37,700 to $40,000. Bitcoin has bounced off the triple bottom support level of $37,750 on the 4 hourly charts, forming the "Three White Soldiers" candlestick pattern.

Although this pattern shows a strong bullish reversal, the downward trendline is extending resistance at $40,000. A surge in Bitcoin demand and a breakthrough at this level exposes the BTC price to the next level of resistance at $40,800. Above this, the major resistance for Bitcoin is at $42,750. 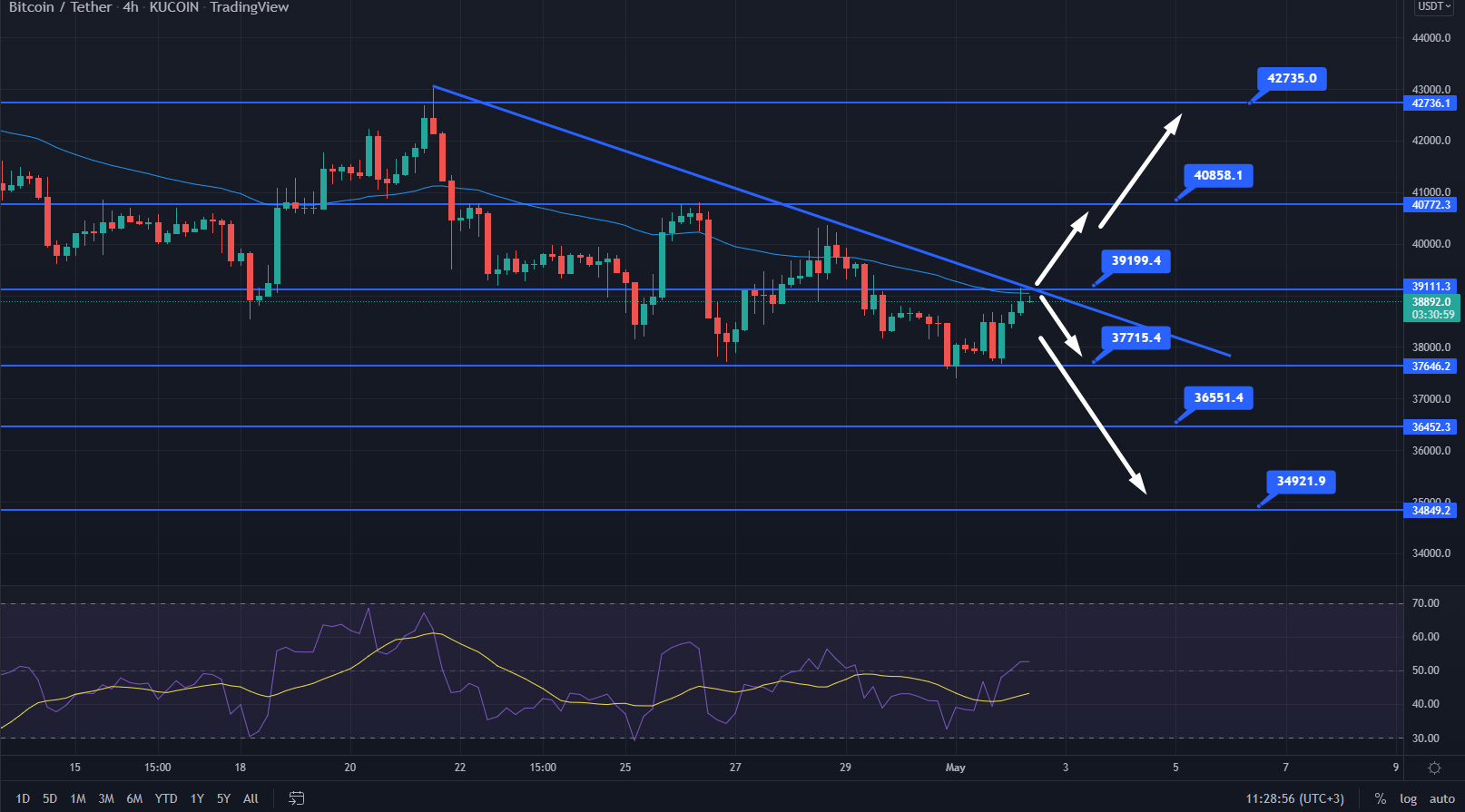 The RSI and MACD are tossing above and below midpoints, indicating indecision among investors. Therefore, failure to break through the $40K level, on the other hand, will weigh on BTC's price. On the downside, Bitcoin's major support remains at $37,715 per coin.